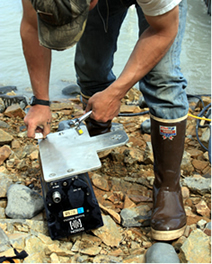 Sonar detection ranges extend approximately 79 feet from the south bank and 59 feet from the north bank. While DIDSON detection ranges do not cover the entire 820 foot width of the river channel, biologists do not worry about missing fish. When river currents are swift as they are at the Yentna site, sockeye salmon conserve energy by migrating close to shore where currents are slower (see reference to study examining migrating salmon energy-conserving behavior). 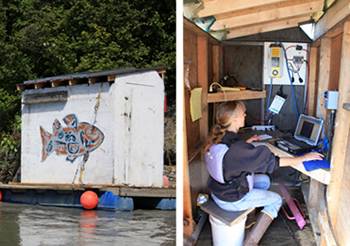 Fish are counted on a computer screen in a wooden shelter alongside the Yentna River's north bank from images transmitted by DIDSON. 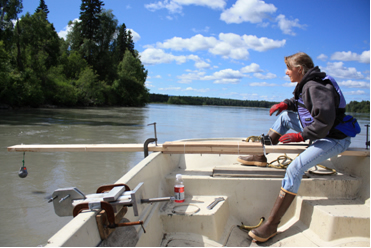 During the research-only phase of the Yentna sonar site project, researchers are testing DIDSON detection, including how well DIDSON can detect a small target within different areas of the sonar beam. Above, a researcher prepares to drop a small weight into the Yentna River within the DIDSON beam.

At most sonar sites in Alaska, ADF&G biologists use sonar to sample over time rather than run sonar continually. At the Yentna River, technicians record 10-minute sonar snapshots each hour along each bank, expand the counts to hourly estimates and then sum the hourly estimates to produce a 24-hour estimate. Research has found the difference in estimates generated while running sonar continually and estimates generated while sampling is very small. But the difference in operational costs is huge (see sampling methods study (PDF)). Now that ADF&G operates the site as a research-only project, it does not process the site's sonar data to produce estimates until after the field season. Sonar operations begin on July 7 and generally end between August 8 and August 15.

In 2008 ADF&G biologists determined sockeye salmon estimates from the Yentna site were biased low and identified both the site’s sonar and fish wheel as sources of error (see Other Tools for more on the fish wheel operations). The Bendix sonar had been undercounting fish. Since ADF&G transitioned the sonar site to DIDSON, biologists believe that the error due to sonar is likely minimal. In the Yentna River DIDSON detects fish better than Bendix sonar. When tested side-by-side DIDSON counted 1.53 times as many fish as Bendix sonar on the north bank and 1.77 times more fish on the south bank. Although DIDSON counts fish better than Bendix sonar, it is not flawless. While the Yentna sonar project is in a research-only phase, biologists are conducting several experiments to determine the accuracy of DIDSON counts.