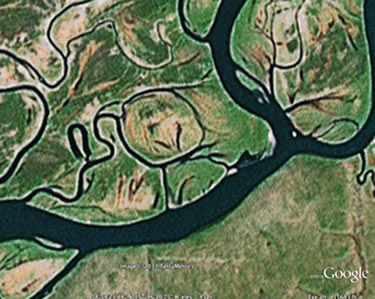 The Nushagak River sonar site operates in a wide and shallow channel of the river. Conditions at the site are favorable for using sonar to detect shore-based migrations of salmon.

The Nushagak River sonar site was designed to estimate sockeye escapement, but the king salmon data the site also collects draws strong interest from the sport fishing community. While the site provides reliable estimates for sockeye salmon, it is less adept as a tool for estimating king salmon escapement. Across the width of the river, the sonar’s detection range adequately covers the region in which sockeye migrate, but not king salmon. In the approximately 1,000-foot wide channel, migrating sockeye salmon swim almost entirely within 50 feet of shore where sonar can easily detect them. Larger king salmon, however, often swim in the middle of the river beyond the range of sonar. Consequently, the site's sonar only counts a proportion of the king salmon migrating past. While a full count is ideal, fisheries biologists can also use a partial count as an index to manage the fishery so long as the site counts the same proportion from year to year. Because the site’s sonar counts within the same region from year to year, biologist have been working under the assumption that it also counts the same proportion of the king salmon from year to year. To check this assumption, ADF&G launched an extensive three-year project in 2011 to track king salmon migrations past the site. To learn more about the project see Other Important Tools.