You are here: ADF&G Home » Hunting » Bison
Sign in
myADF&G

On hard ground, the inner curved hooves may not appear. In snowy terrain, a heavy foot drag is evident.

In summer, when bison feed on lush vegetation, droppings resemble soft patties or pies. In winter, scat appears as dry-segments.

Plains bison (Bison bison bison) are the smaller of two subspecies of American bison found in North America, and they are an introduced, rather than native, species in Alaska.

In 1928, 23 plains bison were moved from the National Bison Range in Montana to the Delta River area in Alaska’s Interior. The herd grew to 400 animals over the next two decades, and hunting began in the 1950s. Today four herds totaling about 900 animals range freely in the state. The largest herd is located near Delta Junction, and smaller herds have been established by translocation from the Delta herd to the Farewell, Chitina River, and Copper River areas.

Hunting is used to manage the size of these herds, and bison hunts are among the most popular drawing hunts in Alaska. For example, with the Delta bison hunt, each year roughly 15,000 hunters apply for about 100 permits, and on average about 74 animals are harvested there. Statewide, the harvest of plains bison averages 92 animals/year.

Bison move slowly while feeding, and although they appear clumsy they are fast, agile and tireless runners. Bison are grazing animals and, in Alaska, they find food along rivers, recently burned areas, and sedge potholes. Their diet is made up mainly of various grasses and forbs like vetch, a favored summer food found on gravel bars. They also eat sedges, silverberry, willow, and ground birch.

Bison are migratory animals with seasonal movement patterns. They do not remain in single herds, but scatter alone or in groups ranging up to 50 animals or more. In the Delta Junction area, they migrate up the Delta River corridor in early spring to secluded meadows where they calve. Around August they travel back downstream, eventually moving onto the Delta Junction Bison Range. In late fall, they move onto area farms and state lands where they remain throughout the winter.

Note: Wood bison, a native bison species extirpated from Alaska in the 1800s, have been reintroduced to the state and will eventually provide hunting opportunity. Learn more here. 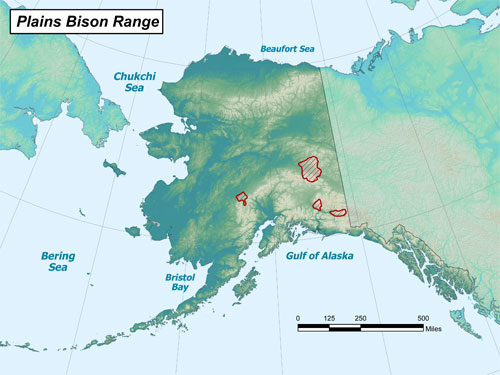