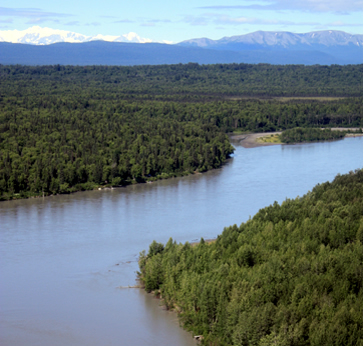 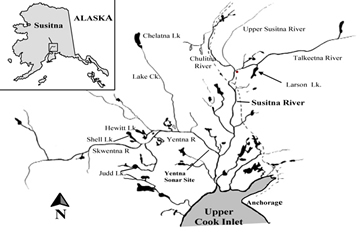 The sonar site is located six miles upstream of the mouth of the Yentna River and consists of two sonar-counting stations located diagonally across from one another. Each counting station includes a sonar transducer submerged near the bank, a wooden shelter housing computers to store sonar data and a fish wheel. The site’s main camp is located along the river’s south bank.

The Yentna River drains an area of 6,180 square miles and is the largest tributary in the Susitna River basin. The Yentna flows about 100 miles southeast from its headwaters in the Mount Dall glacial system to its confluence with the Susitna River, which is 32 miles upstream of the Susitna’s mouth. The Susitna River basin is in southcentral Alaska along the southern flank of the Alaska Range and is Alaska's fifth largest river drainage, covering 19,400 square miles. In the basin steep, rugged mountains tower above wide valley lowlands. Altitudes range from 20,320 feet at Mt. McKinley to sea level where the Susitna River empties into Cook Inlet. Tributaries include silty glacial rivers, such as the Yentna, and non-glacial clear water tributaries.

At the sonar site, the Yentna River flows through an 820-foot-wide channel and over a riverbed of silt mixed with pebbles and a few boulders. The Yentna River is one of the most silty rivers where ADF&G operates sonar. Silty water limits the detection range of sonar and frequent maintenance is required to prevent silt buildup inside sonar transducers. Water levels at the site can rise and fall rapidly due to rainfall requiring site technicians to frequently readjust sonar transducers to ensure proper coverage of fish migration areas.

ADF&G established the sonar site on the Yentna River in 1986, after attempts to establish a site along the lower Susitna River failed. In the lower Susitna River, frequently shifting sandbars divert migrating salmon away from near-shore areas where they can be detected by sonar. When biologists looked for an alternative site location, they chose the Yentna River because more than 50 percent of Susitna sockeye salmon are believed to spawn in the Yentna drainage. ADF&G established the site at mile six of the river because this is the location furthest downstream where the river flows through a single channel. Sonar sites are located where rivers flow through single channels to ensure all migrating fish are funneled past the sonar and do not pass through alternate channels.