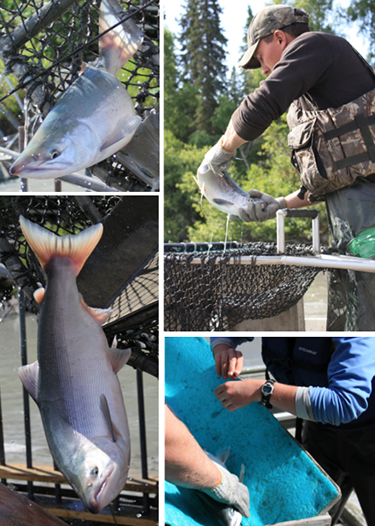 Technicians document the number of each species caught in the fish wheels and measure, document the sex of and collect tissue and scale samples from a subset of the sockeye salmon. Scales are used to determine fish age and tissue samples to determine the genetic composition of the run. Technicians take a tissue sample by clipping an enlarged pointed scale at the base of the pelvic fin known as the axillary process. Biologists use this data to identify trends in returning sockeye salmon runs.

Estimating the abundance of a particular species of salmon in a river is easiest when they are not mixed with other fish species. Since sonar cannot identify fish by species, almost all Alaska Department of Fish and Game sonar sites use either gillnets or fish wheels to separate sonar-detected fish by species. At the Yentna River sonar site, ADF&G uses a fish wheel along each bank. Fish wheels capture fish by scooping them out of the river with large baskets and depositing them into a live box. The relative proportion of sockeye salmon to other species caught in the fish wheel is then examined to determine how many of the sonar-detected fish should be counted as sockeye salmon.

In 2008, ADF&G biologists determined Yentna fish wheels have a tendency to catch more pink salmon than what is representative of the species composition of fish migrations and particularly in years when large runs of pink salmon enter the river. Because pink salmon often return in very large numbers, the misclassification of even a small proportion of them can result in a substantial error in the sockeye estimate. The tendency of the fish wheels to catch a disproportionate number of pink salmon appears to be related to fish size. Pink salmon are the smallest of the Yentna River salmon species, and small fish have a greater tendency to swim close to the bank where fish wheels capture fish.