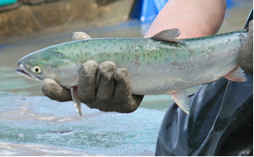 In some years, sockeye salmon are the Yentna River’s most abundant species. But when pink salmon enter the river in large numbers, as they generally do every other year, they typically outnumber sockeye salmon.

At the Yentna River sonar site, the Alaska Department of Fish and Game sorts through overlapping and abundant runs of chum, sockeye, coho, king and pink salmon to produce estimates for just one species—sockeye salmon. Out of 24 sockeye-producing lakes in the Susitna Drainage, 12 are located in the Yentna Drainage. In the Yentna Drainage, Chelatna, Shell, Hewitt and Judd lakes are believed to be the most productive.

While the Susitna River remains Upper Cook Inlet’s third most productive sockeye salmon drainage, its stocks have been in decline and in 2008 the Board of Fish designated Susitna drainage sockeye salmon a stock of yield concern. Several factors are likely involved in the decline, one of which has alarmed biologists. Invasive northern pike, which prey on juvenile salmon, have been found in 14 of the drainage’s sockeye-producing lakes. Susitna sockeye salmon have not developed defenses to protect themselves from northern pike predation. Also, northern pike most effectively prey on sockeye juveniles in drainages with shallow lake systems, such as the Susitna drainage. 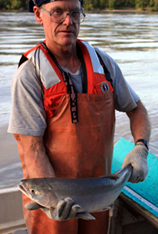 Susitna sockeye salmon are mostly harvested in mixed-stock fisheries by drift and set gillnet fishermen in Upper Cook Inlet. Smaller numbers are also harvested in sport and subsistence fisheries in the Susitna drainage. Using genetic samples from the commercial catch to separate it by stock, biologists estimate Susitna sockeye salmon represent about 5.2 percent of the Upper Cook Inlet sockeye harvest, which averages about 2.9 million fish. 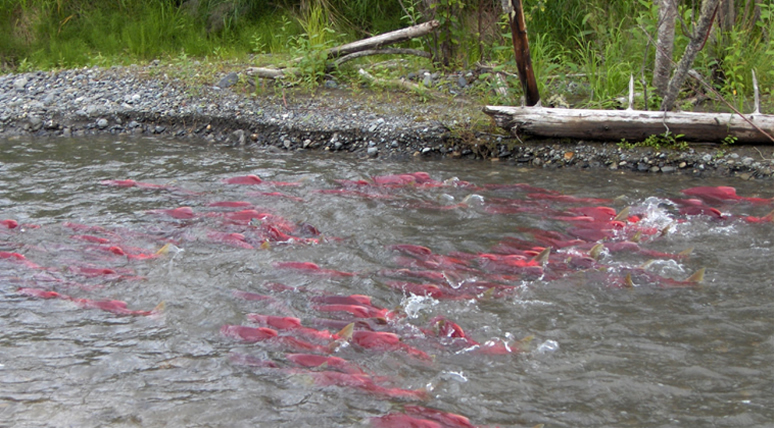 Susitna sockeye salmon display their spawning colors as they migrate up a clear-water tributary.