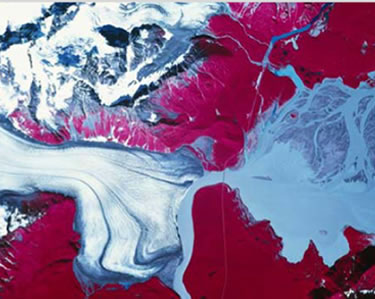 The Copper River sonar site operates under extreme conditions not encountered at any other state sonar site, including icebergs from calving glaciers, extraordinarily high turbidity and very swift currents.

The Copper River sonar site is located in a narrow gap in the mountains where there is a great deal of wind and fine dust. Conditions at the site are strongly influenced by the many glaciers that feed into the Copper River. The glaciers release large quantities of silt that heavily cloud the water and sometimes result in dust storms. The river’s water levels swell with increasing amounts of glacial melt water in the summer and sometimes flood when glacially-damned lakes break loose.

The Copper River site is among the most challenging sites where Alaska Department of Fish and Game operates sonar, but it also one of the longest running. ADF&G has been operating sonar to gauge the strength of Copper River sockeye runs for more than 30 years. This long history is particularly valuable at the Copper River, where extreme environmental conditions preclude fisheries biologists from using many of the tools used to gauge run strength in other salmon fisheries around the state.