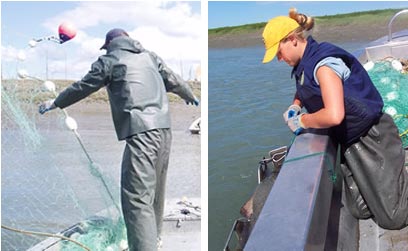 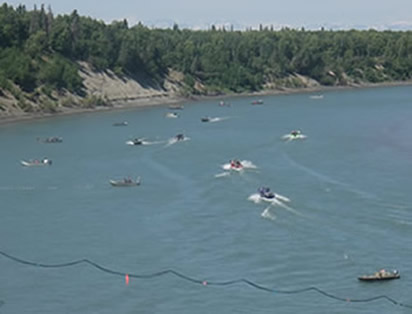 In the lower river adjacent to the sonar site, sonar site crew drift gillnets six hours every day from mid-May to early August. To minimize injuring king salmon, they use undersized mesh nets and never remove captured king salmon from the water. The crew collect scale samples for age, and sex, length and species information as they catch and release fish. Data on fish length and the relative proportion of large kings, small kings and sockeye in the gillnet catches helps biologists determine how many small sonar-detected fish should be classified as king salmon rather than sockeye salmon.

Using what is called a creel survey, ADF&G technicians count and interview anglers on the river throughout the sport-fishing season to estimate king salmon harvest and sport fishery catch rates. Fisheries managers use the catch rates as an indicator of abundance, while recognizing potential biases due to unfavorable fishing conditions. King salmon are less likely to bite, for example, when water temperatures change suddenly and when high levels of turbidity make it difficult for king salmon to see lures.

As another indicator of run strength, we also collect information in Cook Inlet about the commercial eastside setnet king salmon harvest from information setnet fishermen provide on fish tickets. This information is used as an indicator of abundance for the late king salmon run only. In addition to run strength, the commercial king salmon harvest is also influenced by other factors such as how intensively eastside setnet fishermen are fishing in the inlet, which generally correlates with how big the sockeye run is. 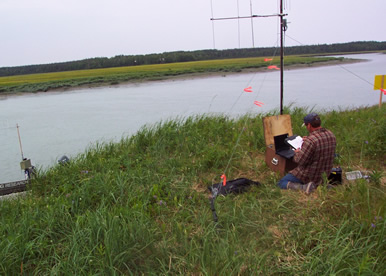 Ground stations established along the banks of the Kenai River detect and record radio-tagged king salmon passage. Each tag has a unique signal allowing us to track each individually as it migrates upstream.

In 2010 ADF&G began a multi-year project to track early and late king salmon migrations up the Kenai River with radio tags. At the Kenai king salmon sonar site, sonar site crew place the tags in the stomachs of king salmon caught in the inriver gillnets. Biologists then track the radio tagged fish with boats, from the air and with ground stations that detect and record fish passage. When the project is complete, biologists can analyze the collected data to provide an independent estimate of abundance to compare with the estimates generated using sonar at the king salmon site.

In previous years, the king salmon sonar project tried to follow the standard set by less-complicated sonar projects by providing the public with a daily estimate.