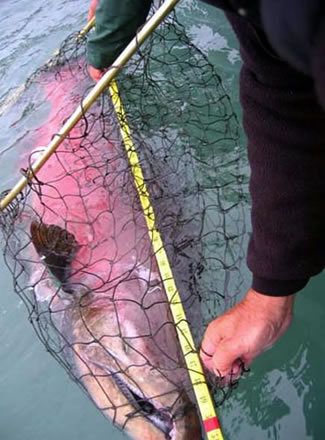 The Kenai king salmon sonar site has been in operation since 1987. Beginning in the early 1990s the Kenai king salmon sonar site used a type of technology known as split-beam sonar to detect fish. Split-beam sonar was advanced in its ability to detect fish at very long ranges - up to nearly 1,000 feet from shore - while also providing information that biologists could use to determine fish travel direction and distinguish fish by size.

ADF&G is transitioning the king site's operations to a newer type of sonar technology known as DIDSON. DIDSON produces ultra-sound-like video of fish and has many advantages over split-beam. DIDSON is better able to determine fish size and to distinguish between individual fish swimming close together. It also requires less staff training to operate than split-beam sonar.

Early models of DIDSON tested at the king salmon site were not able to detect and accurately size fish at sufficiently long ranges. But that has recently changed. A newly-developed lens that nearly doubles the DIDSON's range for high-resolution imaging was tested at the site from 2008 to 2011. These studies have enabled ADF&G to continue the transition to the new DIDSON technology. Another advantage of DIDSON is that it does not require the "perfect" linear bottom profile that is required by split-beam sonar to insonify the near-bottom region of the river where fish generally travel. The king salmon site is currently located in the intertidal zone because it was the only place below the majority of main-stem spawning king salmon that met the bottom-profile constraints of split-beam sonar. Biologists are currently investigating the potential to move the sonar site upstream of the current location and out of tidal influence to a site that will hopefully provide a more accurate measure of king abundance due to better spatial separation by species and better overall coverage of the river by the sonar beams.

In 2012, biologists also conducted the first field tests of the newest generation of imaging sonars known as ARIS (for Adaptive Resolution Imaging Sonar). ARIS offers improved image resolution and other features that may further improve the accuracy of king salmon estimates.

At the Kenai king salmon site, an ARIS is attached to a remote aiming unit then mounted on a tripod for deploying on each bank. Information from the sonar is then collected by several networked computers in the site's tent for processing.

Why were Kenai River king salmon estimates too high with split-beam sonar?

At the Kenai king salmon sonar site, ADF&G has used three methods of processing split-beam sonar data to produce estimates—target strength, which it has used at the site since 1987, and echo length and net apportionment, which it began using in 2002. For many years the relationship between the resulting estimates was generally consistent—each method produced a slightly different estimate, but from year to year they would go up and down together. Fisheries biologists examined all three estimates for management, but for simplicity, ADF&G publicly reported only the target strength-based estimate during the season.

Each of these sonar-data processing methods has potential biases, which is why ADF&G uses more than one estimate and also compares these estimates with indicators not based on sonar. Minor biases are considered acceptable among assessment tools as long as the relationship between estimates and indicators remains consistent. In recent years, for reasons that biologists still do not understand, the target strength estimates began increasing relative to the other two estimates. In 2010 the discrepancy was especially large, perhaps because abundance of large king salmon was relatively low. Recognizing that the target strength estimate was inconsistent with all other indices of king salmon abundance, department biologists focused on the other two sonar- based estimates in addition to other indicators for management needs. ADF&G notified the public that the daily-reported target strength estimate was biased high. In 2011, ADF&G stopped producing target strength estimates and changed its reporting to provide the public with more detailed information on king salmon abundance. In 2012, ADF&G stopped producing all split-beam estimates and now reports DIDSON estimates and DIDSON-based net apportionment estimates, as well as three non-sonar indicators of abundance — sport fishery catch rates, inriver gillnet catch rates and, during the late run, commercial harvest.

To find out more about estimates and indicators and how ADF&G reports them go to Other Important Tools and read “Why ADF&G Only Reports King Salmon Estimates on Tuesdays and Fridays.”