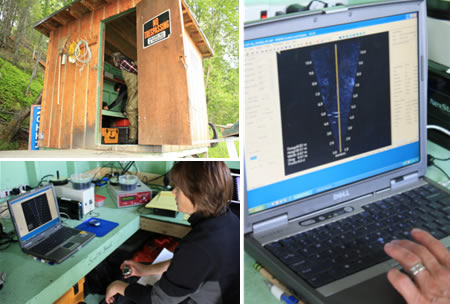 Along each bank a wood shelter housing electronics and computers receives data from a DIDSON transducer detecting fish near shore. In the pictures above, a technician counts fish while watching ultrasound-like video of DIDSON-detected fish in the shelter along the site’s south bank.

At the Kenai River sonar site, the Alaska Department of Fish and Game detects fish using a type of sonar technology known as DIDSON. ADF&G has been using sonar to monitor salmon in the Kenai River since 1968, but has only been using DIDSON for generating escapement estimates since 2008. Before DIDSON the site used a type of sonar known as Bendix. The site used DIDSON and Bendix side-by-side for four years before completely transitioning to DIDSON to generate estimate data in 2008 (see comparison study).

At most sonar sites in Alaska, ADF&G biologists use sonar to sample over time rather than run sonar continually. At the Kenai River, technicians record 10-minute sonar snapshots each hour along each bank, expand the counts to hourly estimates and then sum the hourly estimates to produce a full 24-hour estimate. Research has found the difference in estimates generated while running sonar continually and estimates generated while sampling is very small. But the difference in operational costs is huge (see sampling methods study). 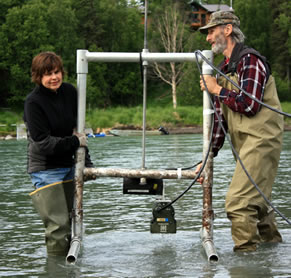 here has been some confusion over how the transition from data collected with Bendix sonar to data collected with DIDSON impacted Kenai River escapement goals. At many of the sonar sites that have transitioned from Bendix sonar to DIDSON, DIDSON has been found to detect more fish. When this happens, ADF&G changes the river’s escapement goals to reflect the improved counting methods (see more on what this adjustment means for escapement goals). When biologists ran the two sonar technologies side-by-side at the Kenai River Mile 19 site, DIDSON counted 1.59 fish for every fish counted by the Bendix sonar along the north bank and 1.25 fish for every fish counted by Bendix sonar along the south bank. To account for the new counting method in the river’s escapement goals, ADF&G converted the old goal numbers from Bendix counting units to DIDSON counting units, which resulted in an increase. The increase in the goal numbers does not put more fish into the river, but is analogous to converting a speed limit in miles per hour to kilometers per hour (see more details on 2011 changes in the Kenai River escapement goal and how sonar factored into those changes).