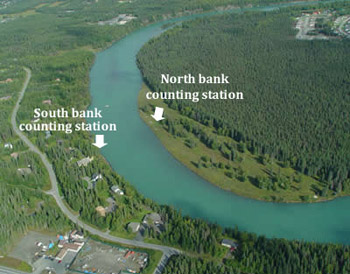 The Kenai River sonar site is located at River Mile 19 a couple of miles downstream of the Sterling Highway bridge in Soldotna. The sonar site consists of two counting stations located across from one another on the banks of the river. At each counting station a single sonar transducer is submerged near the bank and a wooden shelter houses equipment and computers to receive data from the transducers. 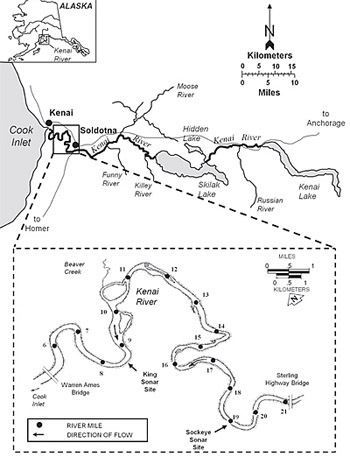 The Kenai River is a glacial stream draining the central Kenai Peninsula and flowing 82 miles from Kenai Lake, through Skilak Lake and into Cook Inlet. The river runs parallel to the Sterling Highway for much of its length making it one of the most accessible major salmon producing rivers in Alaska. The river can be very turbid below the Killey River, which flushes a lot of silt and debris into the Kenai River.

At the sonar site, which is in the lower Kenai River, the river flows through a single 390-foot wide channel over a riverbed of pebble-sized cobble. The site is far enough upstream to avoid the influence of Cook Inlet tides. Seasonal variations in water levels occur due to snow and glacial melt water, with water levels gradually rising through the summer and peaking in late July or early August. Swift currents at the site push fish close to banks, particularly along the site's south bank. More than 90 percent of the fish that swim along the south bank swim within 16 feet of shore. From each bank of the sonar site, the riverbed descends towards the middle of the river with a generally smooth slope. The slope descends gradually from the north bank and somewhat more steeply from the south bank.

Fishery biologists located the sockeye salmon sonar site at River Mile 19 for three primary reasons—riverbed profile, current and access. The smooth riverbed in near shore areas allows the sonar beam to more thoroughly cover fish migration areas. Along uneven riverbeds rifts, ridges or large rocks can create detection shadows in the area covered by the sonar beam. Also, swift currents at the site push fish close to shore where they can be most easily detected by the site's sonar transducers. 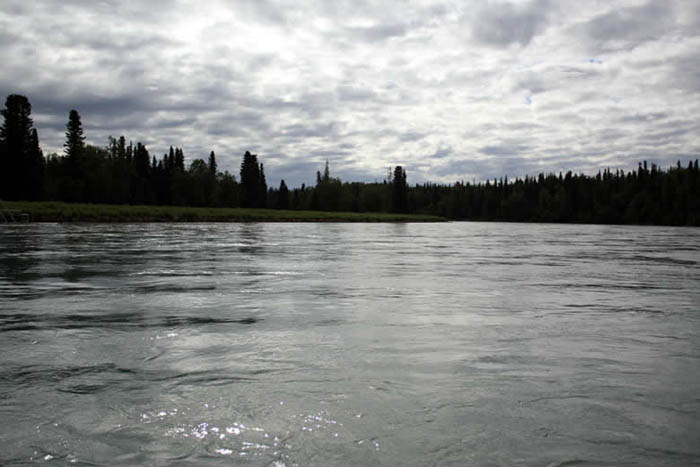 The Kenai River upstream of the sockeye salmon sonar site at River Mile 19.