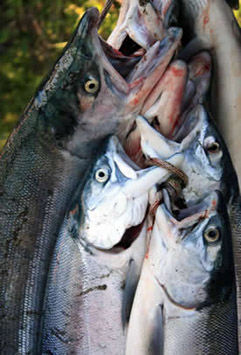 The Kenai River provides habitat for 40 unique species of fish including four species of salmon—sockeye, king, coho and pink salmon—and is by far the biggest producer of sockeye salmon in Upper Cook Inlet.

There are two sockeye salmon runs into the Kenai River, an early run and larger late run. The early run migrates to the Russian River—a clearwater tributary of the Kenai River, while the late run migrates into streams and lakes throughout Kenai drainage. The Department of Fish and Game developed the Kenai River sockeye salmon sonar site project to produce inriver estimates for the river’s late-run sockeye salmon. The late run enters the lower river in early July, peaks in late July and ends between mid and late August.The peak of the run generally lasts seven to 10 days. During the peak, is not uncommon to see sonar estimates of more than 20,000 fish per day. In 2011, an estimated 230,000 fish entered the river in a single day.

The Kenai River late-run sockeye salmon are managed according to three types of goals—a Sustainable Escapement Goal (SEG), an Optimum Escapement Goal (OEG) and a three-tiered Inriver Goal. The SEG is 700,000 to 1.2 million fish and the OEG is 700,000 to 1.4 million fish. There are three possible Inriver Goals depending on the projected strength of the run.

The ADF&G Division of Commercial Fisheries operates the Kenai River Mile 19 sockeye salmon sonar site and is responsible for managing Upper Cook Inlet commercial fisheries to achieve the inriver goal. The ADF&G Division of Sport Fisheries is responsible for assessing inriver harvests and, when necessary, issuing emergency orders to restrict or liberalize the sport harvest to achieve the OEG.