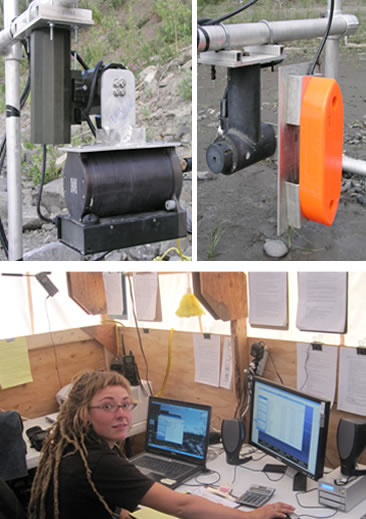 The Alaska Department of Fish and Game has been detecting fish using sonar at the Eagle Yukon River site since 2005. Each summer site technicians submerge two sonar transducers into the river - one approximately 50 feet from the left bank and a second approximately 13 feet from the right bank - and aim them towards the center of the river. They also install a partial weir between each transducer and the bank to prevent salmon from swimming behind the transducer where they cannot be detected.

The site uses two types of sonar technology - DIDSON and split-beam sonar. Two sonar technologies are used to accommodate differences in river bottom profile and salmon migrations along each of the river’s two banks. To aviod strong currents in the middle of the river, salmon swim close to shore - creating a migration band along each bank. The band is wide along the gradually-sloping left bank and narrow along the steeply-sloping right bank. Consequently, along the left bank technicians use split-beam sonar, which is adept at detecting fish at long ranges. And along the right bank they use DIDSON, which is best for detecting fish in near-shore ranges.

A partial weir extending from the bank and installed downstream of the submerged sonar transducer, prevents salmon from swimming behind the transducer without being detected.