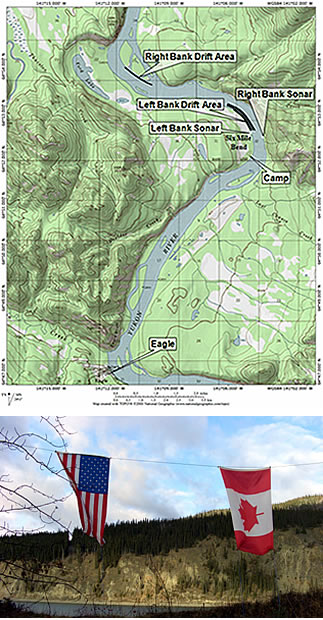 The sonar site is located at approximately mile 1,210 of the Yukon River at a place known as Six Mile Bend. It is also seven miles downstream from the town of Eagle. The sonar site consists of two sonar transducers located across from one another on the banks of the river. The site's primary counting station and main camp are located on the river's left bank.

The river
The Yukon River is Alaska's largest river. The river's watershed covers 330,000 square miles, an area larger than Texas. From its headwaters in Canada to the Bering Sea, it flows 2,300 miles through a sparsely populated and remote landscape in Canada and the central landmass of Alaska.

During spring break-up, ice jams can result in flooding. Since Eagle sonar site operations do not begin until after spring break up, this flooding does not disrupt sonar estimates. But extreme ice-jam flooding can damage sonar site facilities as it did in 2009.

The Alaska Department of Fish and Game located the Eagle sonar site at Six Mile Bend because it is just 18 miles downstream of Alaska's border with Canada and has an ideal riverbed profile for using sonar to detect fish. The river at the site has a linear bottom profile on both sides without large obstructions and flows through a single, approximately 1,400-foot-wide channel.

During spring break-up in 2009, an ice dam developed about four miles downstream of the sonar site. The Yukon River valley quickly filled with water and ice, destroying the Village of Eagle and Eagle sonar site, partially destroying Eagle City and flattening miles of forest along the riverbank. The flooding did not disrupt sonar site operations, which had not yet begun. However, ADF&G crew had to remove downed trees and rebuild camp facilities before the beginning of the sonar field season.