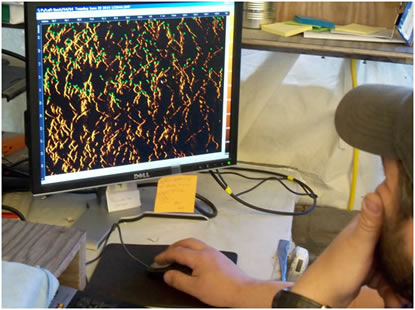 A split-beam sonar echogram (right) represents the echoes returned from each fish as a series of dots referred to as a fish trace. Technicians count echogram fish traces and biologists then use their counts to produce an estimate of abundance.

In the 1990s the Alaska Department of Fish and Game expanded its sonar tool kit with the introduction of split-beam sonar. Split-beam sonar is technically complex to operate, but biologists can use it to collect information about a fish’s three-dimensional position and travel direction to distinguish upstream-migrating fish from downstream-moving fish and debris. Biologists can use split-beam sonar to detect fish swimming far from shore. 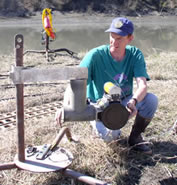 When split-beam sonar is the right tool for the job

Getting into the water