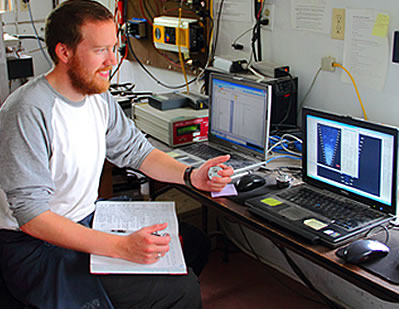 At the Copper River site we detect fish using a type of sonar technology known as DIDSON. We have been using sonar to monitor sockeye in the Copper River since 1978, but have only been using DIDSON since 2005. Before DIDSON we used a type of sonar known as Bendix. The site used DIDSON and Bendix side-by-side for three years before completely transitioning to DIDSON on both banks in 2008 (see comparison report).

With the Bendix counter, we could not determine fish travel direction only that a fish had passed through the sonar beam. With DIDSON we can now separate downstream fish from upstream fish and count only upstream fish towards our estimates. And we can pause or replay DIDSON video files to facilitate accurate counting at the peak of the sockeye migration, when more than 20,000 fish may swim past in a single day (passage rates of more than 50,000 per day have also been recorded at the site).

Using DIDSON we can also spot check our counts by asking two crew members to independently count the fish recorded in a video file. As we do at nearly every sonar site in the state, at the Copper River site we sample over time rather than run sonar continually. We record 10-minute sonar snapshots each hour, which we then expand to represent a full 24-hour period. Research has found that the difference in estimates generated while running sonar continually and estimates generated while sampling is very small. But the difference in operational costs is huge (see references to sampling studies).

The Copper River's rocky bottom, chunks of free-floating ice, highly turbid water and mixed species migrations can limit or interfere with sonar operations. But fish behavior and improvements in technology have helped us overcome or at least minimize most of the logistical challenges we face under these conditions.

Sonar operates best over smooth silty riverbeds, but the Copper River sonar is operated over a field of rocks and boulders. Rocks are very reflective, returning echoes that can drown out subtle fish echoes and create blind spots in the sonar’s detection range. Fortunately, DIDSON has reduced this problem considerably. With its multi-beam system DIDSON is much better at distinguishing between rock and fish echoes than the sonar technologies before it. And the DIDSON comes with background elimination software that makes it much easier to distinguish fish from background echoes. An artificial substrate installed along the particularly rocky south bank also helps. The substrate extends from the bank into the river, providing a smooth profile over which the sonar beam can be directed.

Free-floating chunks of ice due to break up in the spring and calving glaciers in the summer often run into and disrupt the aim of our sonar transducers. To minimize disruptions due to ice collisions we equip our sonar transducers with attitude sensors. Attitude sensors provide detailed information about the position of the sonar transducer’s aim into the river. We have also equipped our transducers with rotators that allow us to make minor adjustments in aim remotely and quickly. When large collisions occur, crew members wade into the river to reposition the transducer. Very large ice chunks can also knock over, drag or even crush sonar equipment. To prevent ice from carrying away sonar equipment, we secure our transducers to shore with ropes. To prevent crushing we encase the south-bank DIDSON transducer in a protective housing.

A DIDSON transducer is mounted on an H-frame stand and deployed into the Copper River from each bank. The south bank DIDSON is housed in a cylindrical case to protect it from free-floating chunks of ice. In the spring of 2011, a large chunk of ice struck the south bank DIDSON transducer and crushed part of the H-frame. Housed inside the cylinder, the DIDSON remained safe and the crew was able to resume operations quickly.

In the highly turbid Copper River, DIDSON detection ranges are much shorter than they would be in clear water. Due to the limiting effects of the turbidity on the DIDSON's range and the river’s width, we can only detect fish near shore. Fortunately, salmon swimming past the site swim close to shore to avoid strong currents in the middle of the river. Along the south bank, the DIDSON has a range of approximately 65 feet and more than 90 percent of fish swim within 33 feet of the bank. Along the more gently sloping north bank, DIDSON has a range of about 164 feet and 90 percent of the fish swim within 65 feet of the bank. Also, a boat-mounted sonar survey of the middle of river found fish were all but entirely absent beyond the range of the DIDSON transducers.

To date, neither DIDSON nor any other sonar technology can identify migrating fish by species. This limitation does not interfere with our ability to estimate sockeye salmon, but prevents us from using sonar to estimate king salmon. At our Copper River site, more than 95 percent of the detected fish are sockeye. So while all of the sonar-detected fish are counted as sockeye, other species have an inconsequential impact on the overall sockeye estimate. But kings trickle into the river in much smaller numbers. Consequently, useful data about Copper River kings cannot be generated without a method for separating them from other sonar-detected species. Some state sonar sites use fish wheels or gillnets to separate sonar-detected fish by species. Unfortunately these tools cannot be used at the Copper River site due to debris, ice and swift currents.

Sonar site operations begin about the middle of May and usually end July 31. Sonar site crew begin operations as soon as possible, sometimes snowmachining equipment to the site and chipping through shore ice to deploy the sonar transducers.