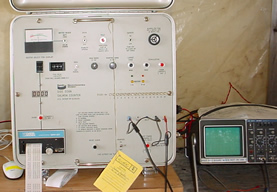 Bendix sonar was the first sonar developed for counting fish in rivers. Above a Bendix sonar counter prints out fish counts on paper tape (left) while an oscilloscope (right) displays echoes bounced off of fish.

In the early 1960s, the Alaska Department of Fish and Game had little information about the salmon returns to many of its most productive rivers—but then the first sonar technology for counting fish in rivers arrived. In the late 1960s ADF&G biologists worked closely with Al Menin of the Bendix Corporation to develop Bendix sonar to count migrating salmon in rivers. Bendix sonar allowed ADF&G to produce salmon estimates for rivers where aerial surveys and counting towers were useless and weirs were problematic due to river size, debris load, silt or boat traffic. Eventually, ADF&G would establish Bendix sonar sites to count returning salmon in nine rivers—Nushagak, Kenai, Kasilof, Crescent, Yentna, Copper, Aniak, Anvik and Sheenjek rivers. Today Bendix sonar has been widely replaced with newer technologies. Only the Crescent River site continues to operate using Bendix sonar. But in the more than 30 years that ADF&G relied heavily on Bendix sonar, the technology repaid ADF&G’s initial investment in development many times over. It provided the data critical to rebuilding many sockeye runs from their depressed levels of the 1960s and early 1970s. 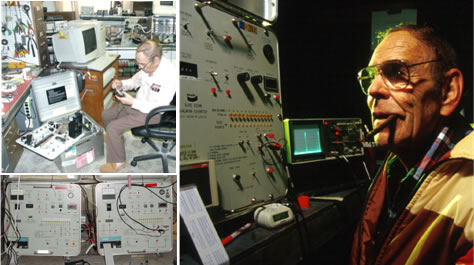 In Alaska, the success of Bendix sonar as a tool for counting adult salmon in rivers was largely due to the annual oversight and maintenance by its inventor, Al Menin. Menin, who worked for the Bendix Corporation, traveled to Alaska each summer to service and maintain Bendix sonar machines for about 30 years. Menin died in 2005 and his ashes were spread in five Alaska rivers where Bendix was used to count salmon. Other people who had a hand in the development of Bendix sonar include ADF&G fisheries biologists Tom Namtvedt, Jim Reardon, Larry Van Rey, Ken Tarbox and Bruce King.

Bendix sonar is on many levels, very practical. It is easy to operate, has low operation costs, low power demands and it is easy to transport and dependable. The Bendix counter can be easily powered with a 12-volt battery recharged by a solar panel.

Bendix sonar works by sending out a beam of sound waves and listening for returning echoes from the acoustically hard swim bladders of fish. It then uses the strength and number of returning echoes to estimate how many fish are in the beam. A Bendix sonar counter produced automatic, hourly fish counts that it would print out on paper tape. The counter had to be periodically calibrated to adapt to the swimming speeds of migrating fish. Fish sometimes adjust their swimming speed in response to changes in light due to time of day or cloud cover, changes in water speed, clarity or depth and fish densities. The more fish there are, the more consistent their swim speed. Technicians calibrate the system by counting echo returns displayed on an oscilloscope for a set period of time and adjusting the automated counter until it agrees with the visual count using the oscilloscope. Frequent calibrations are key to getting the most accurate counts possible.

Getting into the water

Closure of the Bendix sonar era

Around the mid 1990s ADF&G biologists realized Bendix sonar had to be replaced. The demands of fishery management were growing and managers needed biologists to provide estimates for more species of salmon and in more locations, which was difficult given the limitations of Bendix sonar. ADF&G needed a sonar that was more versatile, could sample longer ranges and could distinguish upstream from downstream swimming fish. They also needed a technology that could provide information they could use to diagnose data problems. The Bendix machine cannot store raw data and its hourly counts cannot be reproduced. If data collection problems occur, there is no way to go back and reassess the count.

Additionally, the Bendix Corporation stopped producing Bendix machines and replacement parts and Menin, who had been servicing the machines since he invented them, was considering retirement. As a result, ADF&G pursued new sonar technologies to count fish in rivers and helped pioneer the two new in-river sonar technologies now in use at ADF&G sonar sites — DIDSON and split-beam sonar.