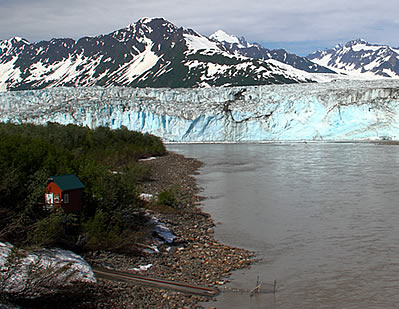 Childs Glacier towers over the Copper River downstream and across from the sonar site’s south bank sonar shack and sonar transducer.

The sonar site is located between the Childs and Miles Lake Glaciers in a narrow gap in the mountains approximately 33 miles upstream of the mouth of the Copper River. By road the site is approximately 45 miles from the town of Cordova at Mile 48 of the Copper River Highway and just below the Million Dollar Bridge. The route along the highway is mostly unpaved and, in the winter, snowed in with six to 30 feet of wind-blown snow and dust mixed together. The road often remains blocked by snow well into May. The sonar site includes a crew camp and two small shacks for monitoring north and south bank sonar transducers. One transducer operates from each bank submerged just below the water’s surface.

Silt, ice and boulders—high turbidity due to glacial silt, massive chunks of free-floating ice due to spring breakup and calving glaciers, and large rocks and boulders create operational challenges in the Copper River. See Site Sonar Tools to find out how we address them.

The Copper River flows southward nearly 300 miles through the Chugach Mountains to the Gulf of Alaska, just east of Prince William Sound. The Copper River basin is the sixth largest basin in Alaska. But due to the high concentration of glaciers in the basin, the Copper River's average annual discharge, 63,300 cubic feet per second, ranks second behind that of the Yukon River. It is the most turbid river in Alaska where we use sonar to detect fish. Visibility is about equivalent to a milk shake. At the site, the river flows over an uneven bed of large rocks and boulders, and is nearly a quarter-mile wide—the second widest river in which we use sonar to detect salmon. The river also has extreme currents due to its high discharge and steeply-sloping terrain.

Why we chose this location

We selected this location for the Copper River sonar site for three primary reasons—it's below the spawning grounds of the river's largest wild sockeye stock and Gulkana sockeye hatchery, the river flows through a single channel and salmon migrating past the site do not swim in the middle of the river. Swift currents at the site push migrating salmon close to shore where we can most easily detect them with sonar. Locating the site as low on the river as possible enables us to gauge salmon abundance early in the run to provide timely inseason data.