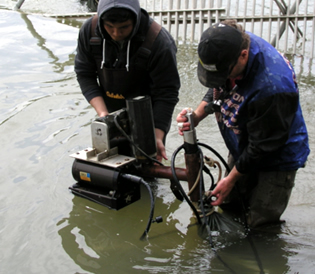 The Alaska Department of Fish and Game has used the Aniak River sonar project to provide daily chum salmon estimates for most years since 1980. ADF&G began sonar operations on the Aniak River using Bendix sonar, but has been using DIDSON since 2004. Each summer, sonar site technicians submerge two DIDSON sonar transducers, one 13 to 33 feet from the right bank and a second 33 to 66 feet from the left bank. Technicians aim the transducers towards the middle of the river and install partial weirs extending from each bank to prevent salmon from swimming behind the transducers undetected. Each transducer is used to detect fish out to a range of 66 feet. Together, the partial weirs and sonar detection ranges cover 72 to 88 percent of the 230-foot wide channel. ADF&G does not use sonar to detect salmon in the middle of the Aniak River. At the Aniak River sonar site about 90 percent of salmon migrate within 33 feet of each of the transducers. Salmon migrate close to shore where currents are slower to conserve energy (see energy-conserving behavior study).

How sonar is used at the Aniak River sonar site 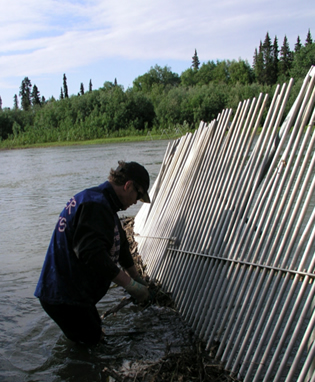 The weirs funnel chum salmon, king salmon and other large fish offshore and in front of the transducers, preventing them from passing undetected behind the transducers.  The two-inch gap between weir pickets allow small, resident, non-target species such as suckers, whitefish and rainbow trout to pass through the weir.

At most sonar sites in Alaska, ADF&G biologists use sonar to sample over time rather than run sonar continually. At the Aniak River, technicians record sonar for three four-hour periods each day and along each bank. Biologists expand the number of fish counted during these four-hour sampling periods to produce an estimate that can represent fish passage for the entire day. Research has found the difference in estimates generated while running sonar continually and estimates generated while sampling is very small. But the difference in operational costs is huge (see sampling methods study - PDF File).

Using DIDSON, technicians can distinguish small fish from large fish, but cannot distinguish fish by species. Aniak sonar site technicians count all of the fish detected using sonar as chum salmon except for very small fish, which are assumed not to be salmon.  During the Aniak sonar site period of operations –June 26 through July 31—80 to 85 percent of the large fish migrating past the sonar are chum salmon.