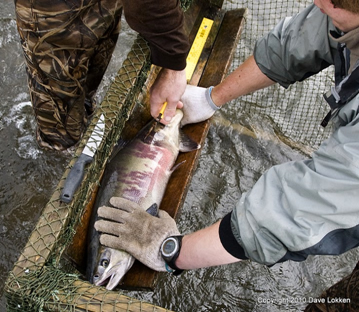 In addition to using sonar to count fish, technicians at the Aniak sonar site also use beach seine nets to capture fish. Data and samples technicians collect from the captured fish help biologists monitor broad changes in species composition, corroborate acoustically detected abundance trends and to collect information about chum salmon. Technicians beach seine from a gravel bar upstream of the sonar site, tallying and recording captured fish by species before releasing them. Before the chum salmon are released, technicians record length, gender and take a scale sample, which is used to determine age. Biologists use gender, length and age information to identify long-term trends in chum runs.

At many ADF&G sonar sites, biologists also use technician fish catch data to determine the proportion of sonar-detected fish that should be counted towards each species. To collect data for this purpose, technicians must catch fish close to where sonar transducers detect them. But at the Aniak sonar site technicians cannot efficiently catch fish near the transducers due to the river’s profile and snags. Consequently, all large sonar-detected fish are counted as chum salmon without being separated by species. The compromise in accuracy due to counting all large fish as chum salmon is believed to be minor since chum salmon typically represent 80 to 85 percent of the large fish counted using sonar. 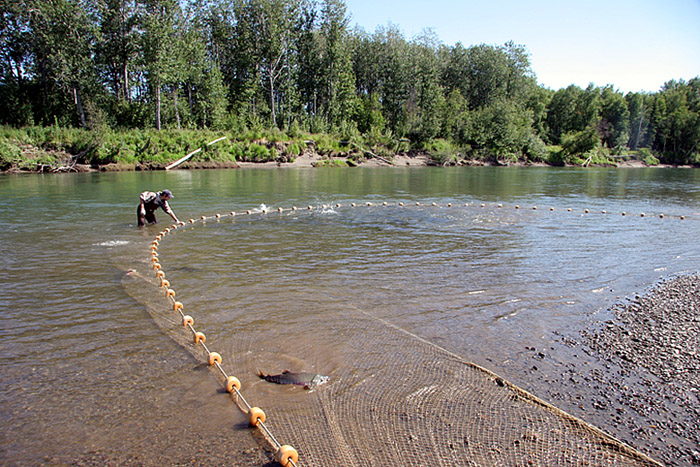 When beach seining fish, technicians secure one end of a long net to shore, tow the other end out into the river then close the net in a wide arc as they bring the unsecured end of the net back to shore. The river bottom and surface act as natural barriers, preventing fish from escaping from the area enclosed by the net.