The sonar is a short seasonal worker on the Anchor River compared with the floating weir we use to gather Chinook run data at the site. We prefer to use weirs over sonar to monitor migrating salmon because they allow us to get a precise count of every fish that swims by and to easily identify fish by species. But generally we can only use weirs in narrow rivers or tributaries. In the Anchor River we can use a weir for all but the first few weeks of the field season when water levels are high due to snowmelt.  Once the water level subsides, a 100-foot weir is installed to replace the site’s sonar.

The weir acts like a fence that prohibits upstream fish migration except through a narrow chute, where observers can easily count fish. The weir appears to be floating on the surface, but on the upstream side is anchored to the stream bottom. In past years, we counted and identified fish as they passed through the chute during the day and blocked fish passage through the chute at night. Fish blocked during the night were released and counted the next morning. But in 2011, we will install an underwater video camera to record fish passage 24 hours per day seven days a week and will no longer close the chute at night. Stored video files will be reviewed daily. The species of fish is easily identified from the video images. 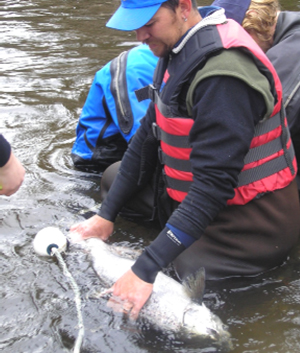 Throughout the field season we also capture Chinook to collect age, length and sex data. This information helps us determine how many Chinook need to reach spawning grounds each year to maintain a sustainable fishery. During the first few weeks of the field season, when we are operating sonar, we beach seine just upstream of the site twice a week to capture Chinook for sampling. Collecting samples becomes easier once we have installed the weir because we can simply collect them from Chinook caught in a live box attached to the weir.