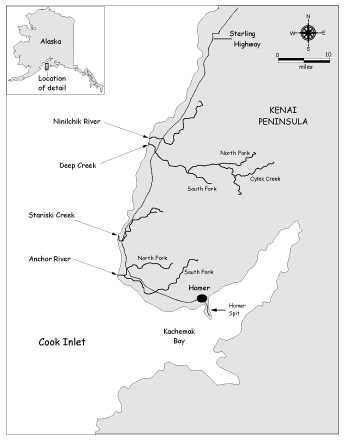 The narrow, rocky, shallow Anchor River is one of the smallest rivers in which we operate fisheries sonar. Located on the southern portion of the Kenai Peninsula and emptying into lower Cook Inlet just south of Anchor Point, the Anchor River and its tributaries provide approximately 165 miles of anadromous fish spawning habitat.

The sonar and weir site is strategically located two miles upstream of the mouth—just below the confluence of the river’s north and south forks, and just upstream of the sport fishery.

The river is 100 – 114 feet wide at the site, depending on water level. Due to its channel geometry, the Anchor River can rise rapidly from snowmelt and heavy rain.  High water levels in the spring prevent us from installing the weir until about mid-June. Before then we monitor migrating Chinook salmon with sonar, which can be operated under higher water conditions.