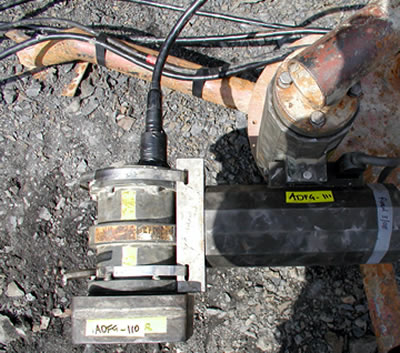 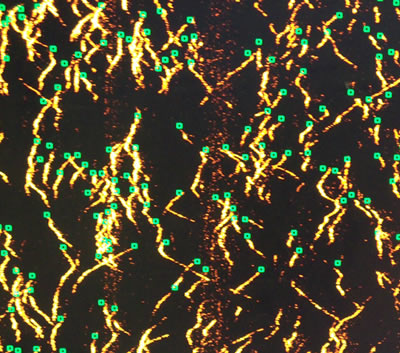 A split-beam transducer (top) is submerged along each of the sonar site’s two banks. The transducer emits sound waves and when it receives the echoes bouncing off of fish it transmits data through a cable to a computer that displays the echoes as fish traces (bottom). Sonar site crew mark and count the fish traces with square markers.

The Alaska Department of Fish and Game began detecting fish at the Pilot Station site in 1989 using just one type of sonar technology, but today it uses two-DIDSON and split-beam sonar. The sonar site is one of three that use split-beam sonar in Alaska River to estimate salmon passage. Split-beam sonar can detect fish up to 980 feet from shore and is used where fisheries biologists need be able to detect fish far from shore.

How sonar is used at the Pilot Station site

Two transducers are used along the left shore due to the difficulties of distinguishing between individual fish swimming close together. The near shore area of the left bank is the most heavily trafficked area in which fish migrate past the sonar site. And while split-beam outperforms DIDSON at detecting fish at long ranges, DIDSON is a better tool for distinguishing between overlapping fish (for more on the differences between these two technologies see Sonar Technology). By using both technologies along the left bank, biologists can get a good count of the fish crowded closest to shore and in less densely crowded areas just beyond the short range of the DIDSON.

At nearly every sonar site in the state, ADF&G biologists use sonar to sample over time rather than run sonar continually. At the Pilot Station sonar site, crew record fish passage in 30-minute intervals, which fisheries biologists then expand to represent a full 24-hour period. Research has found the difference in estimates generated while running sonar continually and estimates generated while sampling is very small. But the difference in operational costs is huge. For each day, the site records nine hours of sonar-detected fish passage along each bank.

ADF&G schedules the sonar site’s operations to begin June 1 and continue until September 7, but ice, flooding and debris sometimes delay the site’s start date. Spring breakup often continues into early June, sending chunks of ice, rafts of trees and heavy silt downstream, and sometimes resulting in floods. Ice chunks and floating trees can knock over sonar transducers and bands of silt can obstruct sonar detection. ADF&G used to delay operations until June 10 to avoid breakup conditions, but now begins earlier in response to concerns among fishermen about salmon arriving before site operations begin. 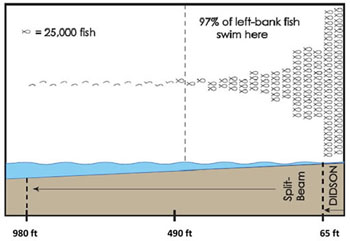 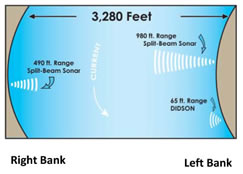 Where the fish swim...

Sonar only covers areas of the river where heavy fish migration occurs. Along the shallow left bank, 97 percent of fish swim within 150 meters of shore. And fish tend to swim even closer to the deeper right bank. Biologists using gillnets and boat-mounted sonar in the middle of the river have found fish are almost entirely absent beyond the range of the sonar. 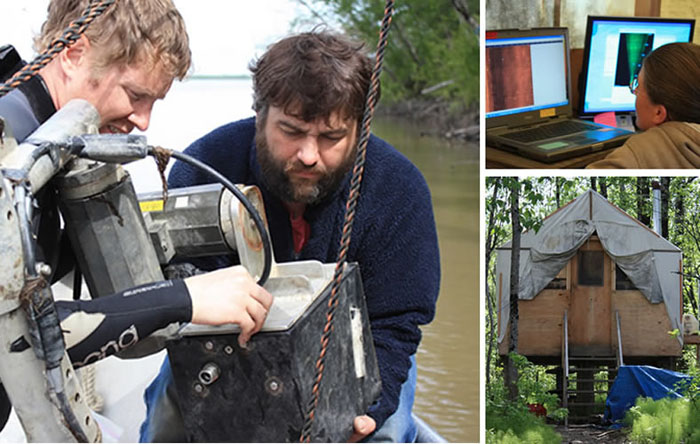