Yukon king salmon may spend up to two years in freshwater as juveniles and one to six years in the ocean. Yukon king salmon range from two to 90 pounds. They have been found spawning as far as 2,000 miles upstream of the mouth of the Yukon.

Yukon coho salmon spend up to two years in freshwater as juveniles and two to three years in the ocean. Coho salmon usually range from eight to 12 pounds.

Yukon chum salmon migrate to the ocean shortly after emerging from the gravel and spend two to six years in the ocean. Two genetically distinct stocks of chum return to the Yukon River—summer and fall chum. Summer chum salmon spawn mostly in the lower 500 miles of the Yukon and weigh an average of seven pounds, whereas many fall chum migrate all the way to Canada to spawn and weigh an average of seven to eight pounds.

The Yukon River supports five species of Pacific salmon and large numbers of non-salmon species such as burbot, Dolly Varden, Bering cisco, humpback whitefish, northern pike, broad whitefish and sheefish. Salmon runs begin in mid May with the arrival of king and chum salmon followed by pink, sockeye and, lastly, coho salmon. An abundance of pink salmon return to the lower river during even numbered years, while considerable populations of coho return to the Tanana River and Andreafsky River drainages of the Yukon. Only a few sockeye are caught in the Yukon each year. The Pilot Station sonar site was designed to estimate the upstream passage of king, chum and coho salmon. King and chum salmon support the river’s two primary fisheries and are known for migrating long distances. Some migrate as far as 2,000 miles upriver to spawn in tributaries in Canada. At the beginning of their journey, salmon that swim the furthest up the Yukon have the highest oil content.

In the Yukon River, king and chum salmon are managed mostly according to tributary-based goals rather than a drainage-wide goal. For king salmon, there is no drainage-wide goal, but only individual tributary goals and a Canadian border passage goal. Similarly, summer chum salmon are managed based on individual tributary goals, however, there is also a minimum number of summer chum that must pass the Pilot Station sonar site before commercial chum fishing can begin. For fall chum salmon, there is a drainage-wide sustainable escapement goal of 300,000 to 600,000 fish. Managers can determine if this goal has been met by examining estimates of harvest and individual tributary goals including the Canadian border passage goal or, preliminarily, by examining harvests and Pilot Station sonar estimates. Coho salmon are managed partially based on Pilot Station sonar estimates in combination with harvest and escapement data, however, only one tributary sustainable escapement goal exists high in the drainage. 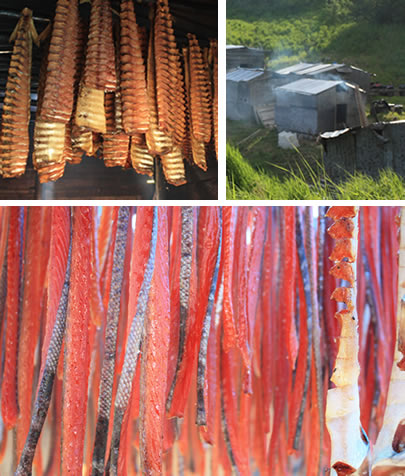 t a fish camp between the sonar site and the community of Pilot Station natives dry and smoke strips of chum salmon (bottom) and other subsistence-harvested species such as sheefish (upper left).

Because Yukon king and chum salmon provide for the livelihood of people living in Alaska and in Canada, they are also jointly managed under an international agreement. Under the Yukon River Salmon Agreement (PDF), the US and Canada have agreed to manage their fisheries to ensure enough salmon are available to meet escapement requirements and to share the fish available for harvest.

Subsistence fishermen use drift gillnets, set gillnets and fish wheels to harvest salmon. Gillnets are the primary method of subsistence fishing used throughout the drainage. Fish wheels are most commonly used in the Rampart Region and Yukon Flats areas.