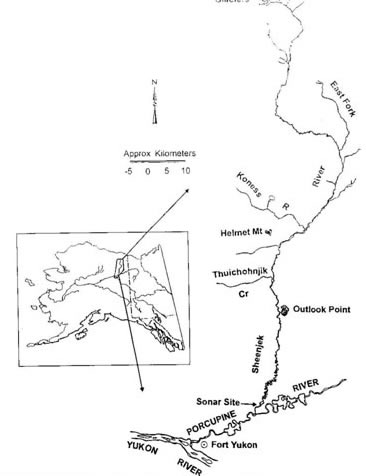 While created by glaciers, the Sheenjek River has numerous clear water tributaries. Water clarity in the lower river is somewhat unpredictable, but generally clearest during periods of low water. Historically, the water level begins to drop in late August or early September. Upwelling ground water composes a significant portion of the river flow volume, especially in winter. It is in these spring areas that fall chum salmon spawn, particularly within the lower 100 miles.

At the sonar site, a smooth river bottom profile provides favorable conditions for using sonar to detect fish. On average the river is about 200 feet wide at site, but width can fluctuate dramatically. The lower Sheenjek River is prone to severe flooding and when heavy rain occurs upstream the river can expand to 650 feet wide at the sonar site. When severe flooding occurs, as it did in 2006 and in 2010, sonar site operations are sometimes disrupted.