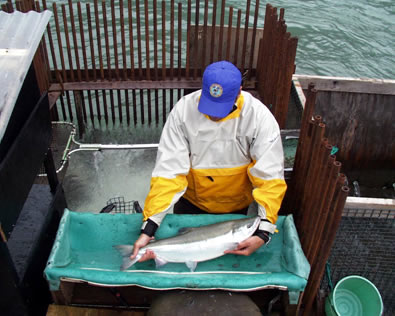 For the first two months of the sonar field season, only sockeye salmon migrate past the site. But then in mid-August coho salmon also begin to arrive. Technicians cannot use sonar to distinguish between species, so they use a weir and beach seine net to help them determine what proportion of the sonar-detected salmon should be counted as sockeye salmon.

Technicians catch a sample of the returning salmon by temporarily closing the weir and netting the backed up salmon behind it. By examining the proportion of coho to sockeye salmon in the catch, ADF&G can estimate what proportion of the sonar-detected fish should be counted as sockeye salmon.

Technicians measure, document the gender of and collect scale samples from the sockeye salmon caught. Scale samples are analyzed to determine age. After measurement and gender data, and scale samples have been collected the salmon are released back into the river. The additional data is valuable to ADF&G biologists for tracking long-term trends in Chilkat sockeye salmon runs.