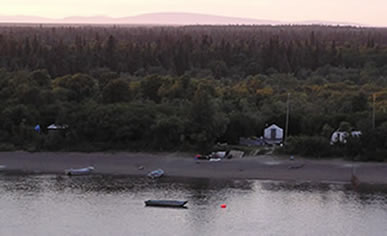 The sonar site is located along the lower Nushagak River, 25 miles upstream of the commercial fishery and 2.5 miles downstream of Portage Creek. The site can be reached by flying to a small landing strip near the mouth of Portage Creek or by boat. By boat the site is about one and a half hours upstream of Dillingham. The sonar site consists of two counting stations located diagonally across from one another on the banks of the river. The site's main camp is on the river's north shore (right bank), while the second station is located on the south shore (left bank). At each of the site's two stations, a sonar transducer is submerged just below the river water’s surface next to the bank. The sonar site's large white tents, buoys and partial weirs make it easy to see from boats passing by. 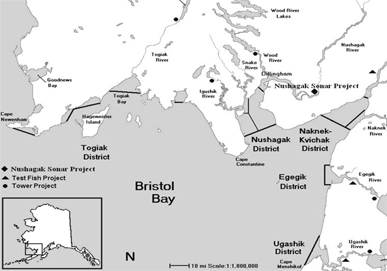 The Nushagak River flows approximately 240 miles from its headwaters to Bristol Bay and is the fifth largest river in Alaska by volume of water discharged. The river has two primary tributaries-the Nuyakuk and Mulchatna Rivers.

Large lakes drain into the Nuyakuk River, while only very small lakes or ponds drain into Mulchatna River and other Nushagak River tributaries. The lower Nushagak River flows over low gradients and often through multiple channels and around well-vegetated islands. In the channel between the sonar site's two stations, the river is wide and shallow measuring about 1,000 feet wide and about 19 feet deep at its deepest point. Along both banks the riverbed drops quickly near shore. After this initial drop off, river depth continues to increase gradually off the north shore and more steeply off the south shore. The deepest portion of the channel occurs in a depression approximately 300 feet from the south bank. The channel's river bottom is graveled with pebbles interrupted by patches of sand, mud or underwater grasses. Water levels in the channel fluctuate daily due to Nushagak Bay tides. From low tide to high tide, water levels can increase by about one to two feet and water flow slows.

ADF&G chose this location because it is below salmon spawning grounds, close to the mouth of the river and yet far enough upstream to avoid major water level fluctuations due to Nushagak Bay tidal influences. Locating the site below spawning grounds ensures all salmon pass the sonar site before they stop to spawn. And locating the site close to the mouth of the river enables the site to count fish early in the run to produce timely estimate data. Also, the site is located where salmon pass the sonar site location through a single channel. 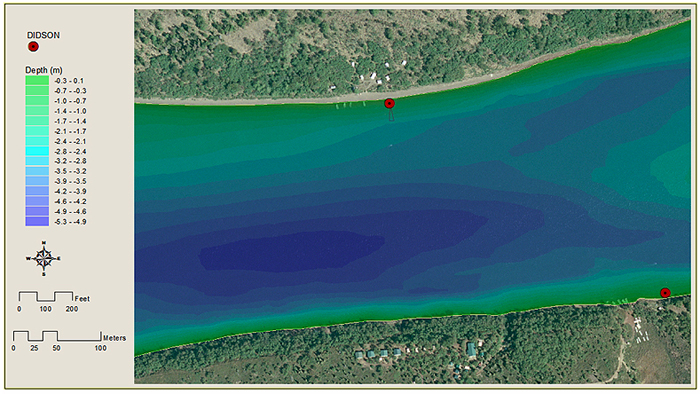 Bathymetric map of the Nushagak River at the sonar site displaying variations in water depth. The site's two sonar counting stations are indicated by the two red dots along the left and right banks.