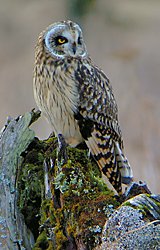 The Short-eared Owl is buffy-brown with a light facial disk and bright, lemon-yellow eyes. Its breast is boldly streaked and its belly is paler and more lightly streaked. In flight, buffy patches can be seen on the upper sides of the wings and black wrist marks on the underside. This medium-sized owl is about 15” long and has long, pointed wings compared to most other owls. Its flight pattern is most distinctive: a wavering, but powerful, mothlike flight. It often perches on the ground where it nests, leaning somewhat forward in the manner of a hawk.

Short-eared Owls hunt mainly during late evening and early morning, but may be active any time of day. Like Northern Harriers, these owls search for prey by flying low and slowly over the tundra, muskegs, marshes, and meadows searching for voles and lemmings, other small mammals, and occasionally shorebirds and songbirds.

Short-eared Owls live exclusively in open country including marshes, muskegs, tundra, and prairies. They are the only Alaskan owl species that migrates south every year.

Short-eared Owl Call (MP3 file 275 kB)
These owls are mostly silent, but courting males give a low hoo, hoo, hoo call made up of 6 to 20 notes and lasting up to 3 seconds. Males also make a wing clapping sound during aerial courtship flights.