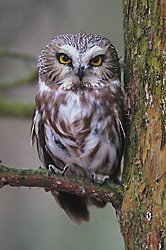 This bird is only about 7.5” long and looks like a small version of the Boreal Owl. But, unlike the Boreal, Northern Saw-whets have dark bills and streaked foreheads.

The Saw-whet is a nocturnal owl, most active just before dawn and at dusk. These owls typically wait for prey from a low perch. They eat mostly voles and shrews, but their diet also includes small birds and insects.