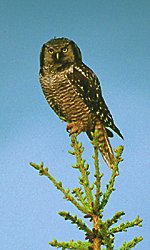 Unlike most other owls, the Northern Hawk-Owl hunts throughout the day, although they are most active in the early morning and late evening. They perch atop trees and watch for prey which includes a variety of small mammals and birds. Their most common prey include meadow voles, red-backed voles, lemmings, shrews, young snowshoe hares, and a variety of small birds.

Northern Hawk-Owls nest in open to moderately dense coniferous forests, and hunt along the forest edges, in muskegs, burned areas, and open subalpine forests. They nest on the tops of tree stubs, and occasionally in tree cavities.

Northern Hawk-Owl Call (MP3 file 281 kB)
Courtship calls are given in late evening and early morning from mid-February through April or May. The song is a prolonged series of short, rolling, sharp whistles. Each call lasts at least 10 seconds and is repeated frequently. It has also been described as a hawk-like rapid, sharp, ki-ki-ki-ki cry.