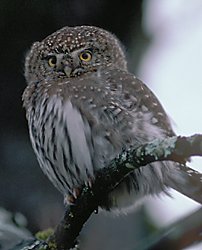 The Northern Pygmy-Owl is similar in color to the Boreal Owl, but has a smaller head, an obviously longer barred tail, and a pair of black patches which can give the appearance of eyes on the back of its head. The Northern Pygmy-Owl, as its name suggests, is a small owl measuring only about 7” long.

Unlike other owls, the Pygmy-Owl has a somewhat noisy flight. Chiefly active during the day, it flies with quick, unmuffled wingbeats. This species sits on a perch and waits for prey to come by, then pounces down driving its talons into its victim’s neck. Pygmy-Owls are aggressive predators and can kill animals much larger than themselves, although their primary food source is small mammals such as voles and shrews, small songbirds, insects and amphibians.

In Alaska it is found only in Southeast. It prefers coniferous forest and forest edges, and often nests in tree cavities. Songbirds will harass, or “mob,” any owl they detect during the day, but the Northern Pygmy-Owl may be more susceptible to harassment because it is active during the day. A noisy mob of songbirds may be a clue to the presence of this tiny owl.

This owl’s call is a single short whistle, repeated at approximately 1-2 second intervals.