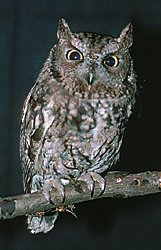 The Western Screech-Owl is generally a mottled brownish color which helps it blend in with tree bark. It has a dark bill, yellow eyes, and prominent ear tufts. Its facial disc is bordered with black. When startled, screech owls stretch tall and hold their wings close to their backs, simulating dead tree branches. Only 8.5” long, this is one of the smaller owls in Alaska.

Strictly nocturnal, the Western Screech-Owl hunts mostly while flying. It prefers to hunt field edges, wetland edges, and open forests. These owls have a varied diet consisting of small rodents, shrews, larger insects, and even fish and amphibians.