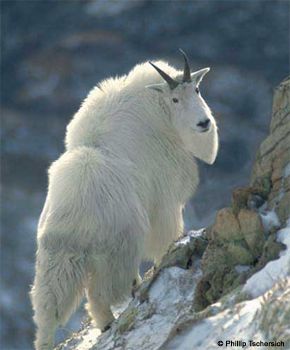 Kodiak's mountain goat population originated from 11 females and 7 males, which were transplanted from the Kenai Peninsula to the Hidden Basin area during 1952 and 1953. Success of the transplant was not realized until 1964 when 26 goats were observed in the Crown Mountain area. The first hunting season was authorized in 1968, and permits have been issued since then. We currently estimate the goat population on Kodiak at about 3,200 goats with all suitable habitat being utilized.

Hunt areas boundaries and the numbers of drawing permits have changed over the years to reflect population trends and goat movements. Currently, over 5,500 applications are received during the annual winter drawing lottery for less than 500 goat hunting permits distributed in 7 separate drawing areas. The chance of being drawn varies from less than 2% for road accessible areas to greater than 5% for more remote areas. The southern portion of Kodiak Island is currently a registration hunt (RG480) in which the season runs from August 20th – March 20th and currently has a 2 goat bag limit. Registration hunts may occur in the northern hunt areas if the harvest goals have not been met during the drawing hunts. When harvest limits are reached, areas may be closed by Emergency Order.

Kodiak's goats are comparable in size to their relatives on the Kenai Peninsula, but movements into virgin habitat may result in faster growth rates. In the fall of 2000, a hunter killed a Kodiak goat with horns that were 10 1/4" long and had 5 1/2" bases, large enough to be included in the B&C record book. Undoubtedly there are bigger ones still out there… 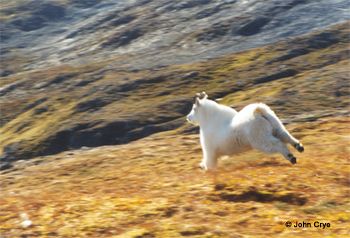 Nannie showing some speed down hill. (photo by John Crye)