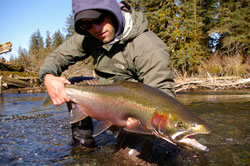 The Situk River is home to five species of Pacific salmon, Dolly Varden trout, and the state’s largest documented run of steelhead. These prodigious runs of fish, largely a function of the high quality habitat found in the Situk watershed, draw both anglers and wildlife. You may easily access the river at several points as it meanders through spruce forests and muskeg meadows during a 20 mile journey from headwaters in the Russell Fjord Wilderness to the Gulf of Alaska.