The waters around Yakutat offer wonderful opportunities to view wildlife from boats, whether a canoe, kayak, or private or charter boat. 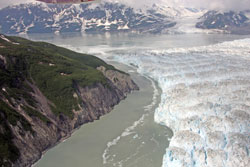 The sheltered waters of Yakutat Bay, Disenchantment Bay and the open ocean - the Gulf of Alaska - host a great variety of water birds. Rare throughout much of the Pacific, marbled murrelets are abundant here year round and the less common Kittlitz’s murrelet can be spotted around Yakutat bay. Look for Arctic and Aleutian terns foraging near Cannon beach and the shorelines near town, often associated with blacklegged kittiwakes and Bonaparte’s gulls. Rafts of sea ducks (primarily surf and white-winged scoters) can number into the tens of thousands. Open sea areas may host pelagic (sea-going) birds such as northern fulmar and sooty shearwater, or, with some luck, a black-footed albatross. Pelagic cormorants are often moving near shore. Common, Pacific and occasionally yellow-billed loons may be present.

The sheltered inshore waters tend to have rock and cobble shorelines, often very close to old growth forests – islands in Yakutat Bay, Russell and Nunatak Fjords are examples. During spring and fall look for black turnstones and other shorebird species. All year northwestern crows congregate to feed on mussels and other shellfish. Watch for them dropping objects from above to crack shells. Black oystercatchers nest on islands and around bays. Northern sea ducks, harlequin duck and Barrow’s goldeneye commonly approach or even perch on rocky points here when they leave adjacent waters. 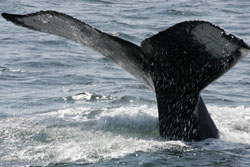 Long expanses of open beach extending more than 50 miles make for good long-distance viewing for inshore water species, mentioned above, and for viewing high-flying migrants such as sandhill cranes during migration. Additionally, this is nesting habitat for a number of interesting species including: Arctic, Aleutian and Caspian terns, semipalmated plover, spotted sandpiper, and parasitic jaeger. Large groups of gulls, numbering in the hundreds to thousands, may rest along the surf line. Glaucous-winged gull and herring gull are the most common of the large “seagull” species, but determined birders are sure to turn up rarities given the large numbers of birds and strategic geographic location for vagrants. In migration, shorebird species, especially sanderling, may feed near the surf. Black Sand Spit, a peninsula in the Situk-Arhnklin Estuary, is an excellent birding site in the immediate area. Aleutian terns nest here between late May and June, in what is believed to be the biggest breeding colony in North America.