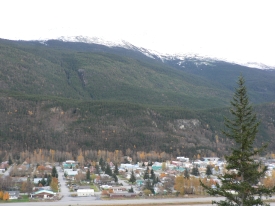 Venture out on one of Skagway’s great hiking trails, looking and listening for signs of wildlife. Rent a car and drive out to Dyea, watching for bald eagles, bears, harbor seals, and harbor porpoises along the way. Bring your tent and sleeping bag and hike the famous Chilkoot Trail. Grab your binoculars and scan the ridges above the Klondike Highway for mountain goats. These and other wildlife viewing opportunities await you in and near the community of Skagway. Skagway has the driest climate of any community in Southeast Alaska, with an annual precipitation of 29 inches. Along with all the typical habitats of the region, including spruce-hemlock forest and alpine, Skagway has pine forest, which is highly unusual in this temperate rainforest region. Today less than a thousand people call Skagway home, but you can still see remnants of the city’s bustling past as you stroll through downtown. Skagway was a jumping-off point for the Klondike Gold Rush of 1898, and once boasted a population of over 20,000 people seeking their fortune. They all headed for Canada’s Klondike region, convinced there was “gold in them thar’ hills.” A few got lucky and struck it rich. Most went home disappointed. Some stayed, not because they found gold, but because they found a place they wanted to call home. Spend a few days in Skagway and you’ll come to realize that, while there may not be much gold, there is definitely wildlife in them thar’ hills. For information on tours and lodging, consult the Skagway Convention and Visitors Bureau. Visit http://www.skagway.com or call 907-983-2854. In Skagway, stop by the visitor center downtown at Second Ave and Broadway.