Tips on Shooting a Bison 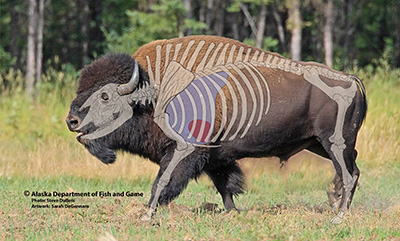 We strongly discourage taking a long first shot. Avoid the temptation. Taking a closer shot will improve your shooting accuracy, minimize the chances of wounding a bison, and make any needed follow-up shots easier and more accurate. The additional time spent on a good stalk and getting as close to the animal as possible is well worth the effort.

Double lung shots are best for bison. For a lung shot, aim above and slightly behind the front “elbow”. We recommend that you do not make a head shot or neck shot; bison have thick skulls and bullets have been known to hit the skull without penetrating. The neck is short and very thick, making it difficult to locate the spinal column for a lethal shot.

Bison are herd animals and they have a strong urge to remain with their herd, particularly when frightened. If you shoot a bison and it does not fall immediately, it commonly seeks protection within the herd. You may then have a problem determining which animal has been hit. Hunters have been known to shoot more than one bison because of this. Only shoot a bison that is separated from the herd.

When bison are frightened they commonly run for cover. It is extremely difficult to track a wounded bison and its herd through the forest because of the churned-up dirt or snow. The herd frequently separates into smaller groups, compounding the challenge of locating a wounded animal. To avoid having a wounded animal get into a forested area, try to position yourself between the bison and any trees before you shoot.

To summarize the key points in shooting a bison: 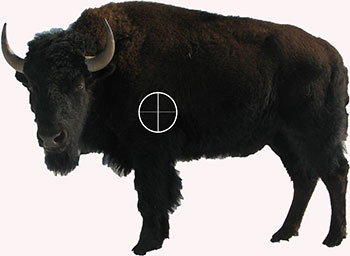 Double lung shots are best for bison. The crosshairs show where to place the shot.