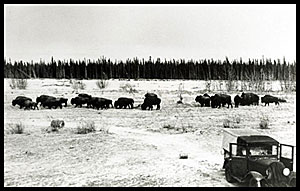 Bison were once among the most abundant large animals in Alaska as well as in the rest of North America. The northern subspecies of bison, the wood bison (Bison bison athabascae), occurred throughout Interior Alaska for millennia but it disappeared sometime in the last few hundred years. Plains bison (Bison bison bison) were introduced to the state in 1928 in hopes of providing future hunting opportunities. That year, twenty-three plains bison were moved from the National Bison Range in Montana to Alaska's Delta River area. The herd grew to 400 animals over twenty years and hunting began in the 1950s. Today four herds totaling about 900 animals range freely in the state. The largest herd, currently numbering about 450 animals, is located near Delta Junction. Smaller herds have been established by translocation from the Delta herd to the Farewell, Chitina River, and Copper River areas.

For information on general bison life history, and potential reintroduction of the wood bison to Alaska, see the Life History page.