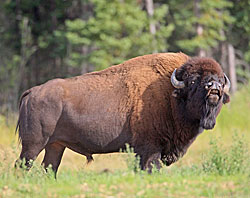 Unless you’ve been drawn for an any-sex bison hunt, your permit will be for either a bull or a cow bison. It is mandatory that you pre-identify and shoot only a bison of the sex indicated on your permit.

The physical differences that distinguish male (bull) from female (cow) bison are subtle. In fact, males and females can look very similar, especially when the males are not yet mature. In addition, for any particular characteristic, animals of the same sex can display significant variations. This makes the hunter’s job all the more difficult. 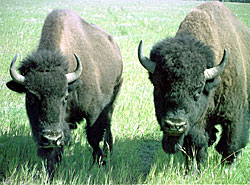 The table below lists characteristics to help you differentiate between bull and cow bison. The bottom line is: Do not rely on any single physical or behavioral characteristic to accurately identify the sex of a bison. Use multiple characteristics. Most hunters that mistakenly shoot the wrong sex bison concede later that they relied on only one characteristic and did not take the time to make a positive identification. Don’t make the same mistake.

The bottom line is, if there is any chance you could be making an error in selecting an animal, don’t shoot. You have a long period in which to hunt. Take your time and make a correct identification first.

Characteristics that can Help Identify Male and Female Bison

Where to Hunt Bison