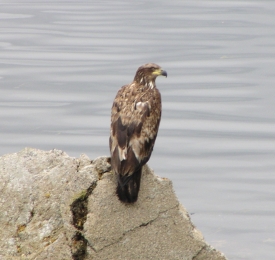 Bald eagles congregate at Turnaround Park and New Thomsen Harbor from early May to mid-July. Look for great blue herons feeding at the water’s edge throughout the year, and arctic terns, mink and river otters in the cove at Turnaround Park.

There is also good tidepooling on the tidal flats at the mouth of Turnaround Creek at low tide.

Look for bald eagles and great blue herons perched on rocks, pilings, and even on boats in the harbor.

Be aware and respectful of fishermen and boat owners if you explore New Thomsen Harbor.

Turnaround Park is near the instersection of Halibut Point Road and Katlian Street on the northwest outskirts of downtown. New Thomsen Harbor is just south of Turnaround Park.