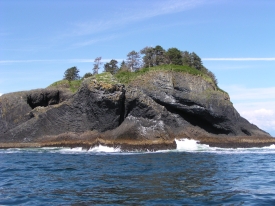 Saint Lazaria Island looms like a sentinel at the outer edge of Sitka Sound. This 65-acre island is part of the Alaska Maritime National Wildlife Refuge and is home to over half-million breeding seabirds, including cliff nesters like common and thick-billed murres, and burrow nesters such as rhinoceros auklets and fork-tailed and Leach’s storm petrels. Glaucous-winged gulls, ancient murrelets, Cassin’s auklets, pelagic cormorants, tufted puffins and black oystercatchers also nest on or near the island. Bald eagles and peregrine falcon circle the skies over the island. Saint Lazaria Island was formed by a vertical upwelling of magma from an undersea vent adjacent to Mount Edgecumbe, the volcano on Kruzof Island visible from Sitka. This means that deep water surrounds the island, allowing for good viewing from boats (especially with binoculars).

Saint Lazaria Island attracts nesting birds due to its combination of proximity to the open ocean resources and the protection from terrestial predators afforded by Sitka Sound.

Imagine over 7,500 birds nesting on an area the size of a football field – and then double that number with chicks, and repeat this over 65 acres. This gives you some sense of the incredibly desnity of nesting birds on Saint Lazaria Island.

Not all boats are wheelchair accessible; ask when booking your tour. Advance booking is strongly recommended for Saint Lazaria tours, though last minute bookings are possible. You may encounter rough water, and tours sometimes are cancelled or shortened due to especially stormy seas. To prevent visitors from crushing burrows, the island is off-limits to people, except for a small research team that works to understand more about the diet, behavior and health of the birds.

Tours are offered throughout the summer and depart from Crescent Harbor downtown. Check with the Visitor’s Bureau for more information.