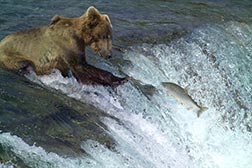 If you want to see bears—and lots of them—just remember: it’s all about the food. Some areas of Katmai National Park, like the food-rich Pacific coast, support high densities of bears while other areas, like the Valley of Ten Thousand Smokes, support only a few bears in any season.

At the popular Brooks Camp, a healthy salmon run lures large concentrations of bears, especially in July when the fish are migrating upriver, and in September when spawned out salmon provide easy pickings. Mid-July is typically when the largest number of bears can be seen. In late July, bears begin to disperse to feed in other areas.

By August, when salmon are less concentrated and still energetic enough to avoid hungry bears, the bears disperse. But by late August, as the fish have begun to weaken and die, bears will again migrate to the Brooks River to feed. In September, bears are usually present in high numbers as they search for dead and dying salmon.

From June 1 to September 17, the National Park Service operates a visitor center, ranger station, campground, and auditorium with daily ranger-led programs. The park concessioner, Katmailand, Inc., provides additional services and amenities including meals and lodging at Brooks Lodge. There are three elevated wildlife viewing platforms along the river, one at Brooks Falls, one downstream of the falls and one at the mouth of Brooks River.

While Brooks Camp offers many public services and accessible options unavailable elsewhere in the park, visitors must arrive prepared to experience backcountry Alaska. Whether staying for just a few hours or for several days, you should expect to encounter windy, rainy, and cold conditions. Be sure to dress and pack in anticipation of diverse and changing weather conditions. 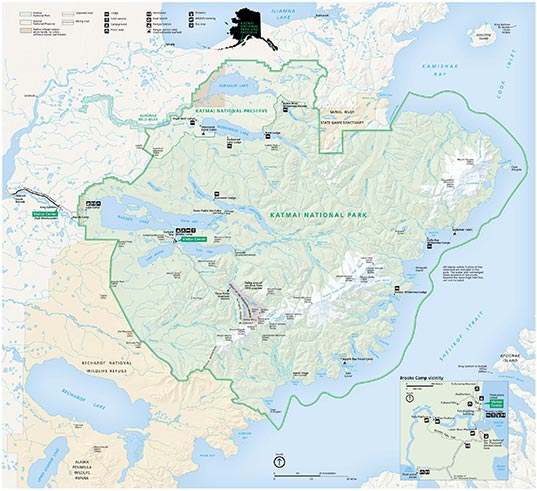 Katmai is accessed by plane or boat. Much of the park is rarely visited and opportunities for incredible wilderness experiences abound. Other areas, such as Brooks Camp, are more easily accessed and have amenities like lodging and hot meals. Many companies provide a variety of commercial visitor services including transportation, guided day trips, guided multi-day trips, overnight accommodations and food services. Commercial partners are authorized by permit to operate in the parks. A complete list of services is available at go.nps.gov/1i7ykf.

Most destinations in Katmai National Park & Preserve are directly accessed via air taxi flights from Anchorage, Dillingham, Homer, King Salmon, Kodiak, and other nearby Alaska towns and villages. Prices depend on group size, type of airplane, length of flight, and where the flight originates. Air taxi operators can be helpful in determining the most efficient way to reach your destination. Regularly scheduled commercial flights to King Salmon (AKN) are available from Ted Stevens Anchorage International Airport (ANC).

Boats can access the Pacific coast of Katmai. Brooks Camp and other locations along the Naknek River drainage can be reached by power boat from the villages of Naknek and King Salmon.

Brooks Camp, the most popular destination in Katmai, is approximately 30 air miles from King Salmon. Brooks Camp can only be reached via small float plane (chartered from many of the towns and villages listed above) or boat. Katmailand Inc., the park’s concessionaire at Brooks Camp, offers seat fares on flights to and from Brooks Camp.

Katmai National Park & Preserve is located on the northern Alaska Peninsula, northwest of Kodiak Island and southwest of Homer, Alaska. The park’s headquarters is in King Salmon, about 290 air miles southwest of Anchorage. 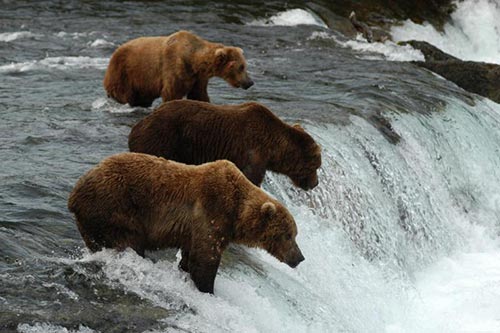 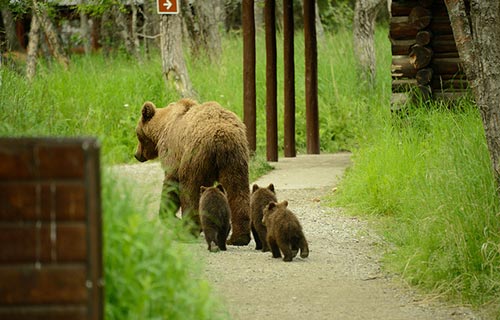 Bears may be using the camp pathways too. Photo: NPS 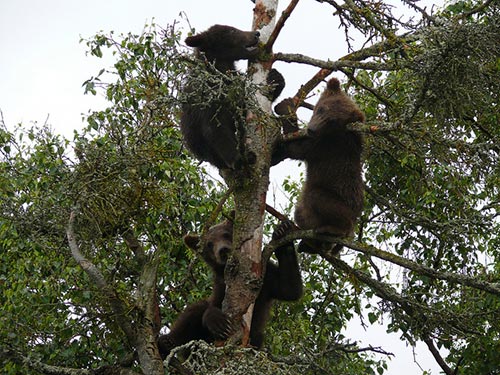 Nimble cubs of the year in a tree. Photo: NPS