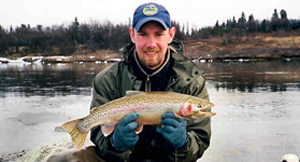 The sport fisheries of this large region are more easily discussed by dividing the management area into three geographic sections: Eastern, Central, and Western. The three sections are based on general habitat types and are somewhat arbitrary. However, for some species such as rainbow trout, the sections represent distinct differences in the character of the fisheries or biology of local stocks.

The eastern section includes all drainages from the Kvichak River to the area's southern boundary at Cape Menshikof. Major federal jurisdictions in the eastern section include the Lake Clark National Park and Preserve, Katmai National Park and Preserve, and the Becharof National Wildlife Refuge. The central section is composed of the drainages entering Nushagak Bay, and is dominated by the Nushagak and Wood River systems. The Wood-Tikchik State Park falls within the central section boundaries. The western section reaches from Cape Newenham east to Cape Constantine on the Nushagak Peninsula and contains a significant portion of the Togiak National Wildlife Refuge.

Major communities located within the region include Naknek, King Salmon, Dillingham, Togiak, and Iliamna. The management area is not linked to the state's highway system although local roads do provide sport fishermen with limited access near the major communities. Float equipped aircraft are commonly used to access the area's many remote fisheries. The Bristol Bay Sport Fish Management Area includes portions of three areas for the purposes of effort and harvest reporting in the statewide mail survey. These are: the Nushagak area (Area T), the Kvichak area (Area S), and that portion of the Naknek River Drainage-Alaska Peninsula Area (Area R) excluding the saltwater fisheries and freshwater fisheries of the lower Alaska Peninsula, Cold Bay, and the Aleutian Islands.