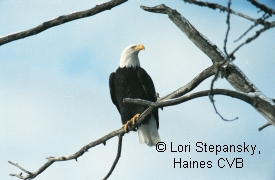 The 48,000-acre Bald Eagle Preserve was established along the Chilkat River as an Alaska State Park in 1982 to protect critical habitat for eagles. There are over 80 bald eagle nests and a year-round eagle population in the low hundreds in the preserve. In the winter, the largest congregation of bald eagles in the world gathers to feed on a late season salmon run. Parts of the Chilkat do not freeze over due to an “alluvial fan” (a fan-shaped pile of rocks and other debris) located beneath the confluence of the Tsirku, Klehini and Chilkat rivers. During the spring and summer, rain and meltwater flow into this alluvial fan, creating a huge reservoir of water in the cracks and spaces. As temperatures drop, the water stored in the alluvial fan stays above freezing, and seeps into the Chilkat River throughout the winter. This upwelling warmer water keeps parts of the river ice-free, and salmon runs in these ice-free areas attract more than 3,000 eagles between mid-October and January.

The Alaska Bald Eagle Festival is held in Haines each November during the large bald eagle congregations. The festival is hosted by the American Bald Eagle Foundation and includes guided naturalist trips to the Bald Eagle Preserve, educational wildlife exhibits and presentations, and the opportunity to watch rehabilitated eagles be released to the wild. For details, visit http://www.baldeaglefestival.org or call 907-766-3094.

The river "flats" of the Chilkat River along the Haines Highway between miles 18 and 24 are the main viewing area for eagle watchers and considered critical habitat in the preserve. Pullouts on the Haines Highway at miles 19.5 and 20.9 have restrooms, a viewing platform, interpretive signs and spotting scopes with good views of the winter eagle congregations.

The bald eagle preserve is on the Chilkat River Land-based tours visit the preserve during the winter, or you can visit on your own.