A substantial proportion of the materials entangling Steller sea lions in Southeast Alaska through Oregon have been coming from marine sources. From 2000-2015, we documented roughly 350 Steller's in just Alaska and British Columbia that were entangled in marine debris, primarily around the head and neck. Most entangling materials were actually unidentifiable because they were so deeply embedded in flesh. However, when visible, the most commonly identified materials are plastic packing bands, followed by rubber straps from crab pots, and various netting, ropes, and monofilament line. 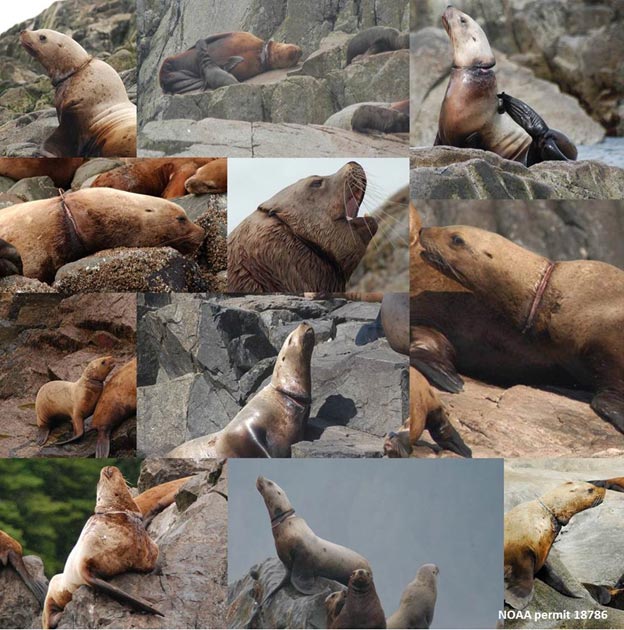 Plastic packing bands are the most frequently identified material among entangled Steller sea lions. These bands do not stretch or biodegrade, and they don't typically break without mechanical cutting, so they produce some of the most ghastly wounds.

Plastic packing bands are used to secure or reinforce many kinds of material and packaging. Extremely cheap, durable, and compact, plastic packing bands are distributed on large continuous rolls that can contain thousands of feet of strapping. A specialized machine wraps packages with strapping and cuts it to length, then uses heat/friction/ultrasound to fuse the ends together in a continuous loop. That whole process takes just an instant, but when that loop ends up in the ocean and around a sea lion the misery lasts a lifetime. You see, packing bands don't bio- or photo-degrade so they persist in the environment indefinitely. And they are really strong too, so they are difficult to break without mechanical cutting. What that means for an entangled sea lion is that the packing band will gradually cut into their neck as they move around and grow larger, producing painful injuries and gruesome wounds.

Plastic packing bands are manufactured in a variety of colors/dimensions/materials and are distributed on rolls containing thousands of feet of strapping (left). It is cut to length and fused into a continuous loop on-site when needed, using a machine specific to each packing band manufacturer's product. When a roll of unused polypropylene packing band ends up in the ocean, it unravels into a snarled mess (middle and right), and then drifts with ocean currents and prevailing winds and can entangle anything it encounters.

The packing band entanglements we see in southeast Alaska are most consistent in size, shape, and material of those used on boxes of frozen fish bait. These bands are made of nylon, polyester, or polypropylene — the latter of which pose a particularly dangerous entanglement hazard because they actually float. 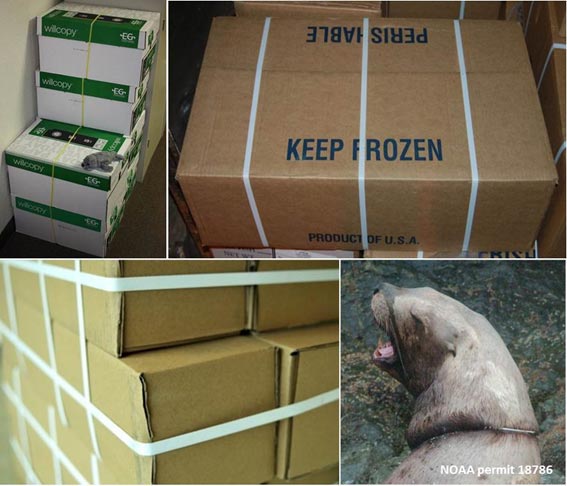 Most of us will recognize plastic packing bands as the strapping used to secure and add strength to other packaging such as cardboard boxes. These straps are cheap, quick, and resilient which means there are a lot of them out there in the environment. When marine mammals become entangled in packing bands, they end up with grisly wounds that can eventually lead to death. 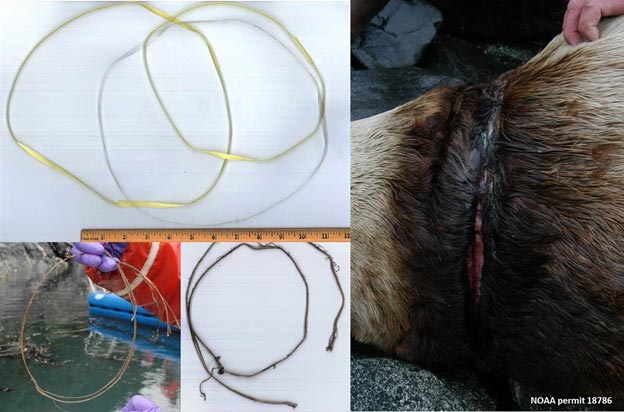 Plastic packing bands (upper left) are cheap, compact, strong, and durable. Two recent examples of packing bands removed from sea lions following long term entanglements (lower left). Though these bands appear well worn and weakened, they would not break on their own. It took a number of well-directed cuts with a sharp tool to finally release the tension and free the entangled sea lion.

Boats have myriad opportunities for packing bands to enter the ocean, whether purposefully or accidentally, so proactive steps must be taken to ensure they don't become entanglement hazards. For example, the Australian government banned packing bands at sea during their rock lobster fishery and subsequently there was a significant decrease in marine mammal entanglements. Similar reductions were observed at South Georgia Island after an international law required people to cut, rather than remove intact, all packing bands aboard vessels operating in Antarctic waters so they pose less of an entanglement hazard if they go overboard.

There has been some progress towards a band-less future. Self-locking cardboard boxes are in development and there are other environmentally friendly alternatives such as straps made of gradually degradable materials and adhesives. Unfortunately, these technologies are not yet practical because they cost more than traditional banded boxes and their durability is questionable. That's why it's so important to recognize that we are all part of the problem AND solution — "Lose the Loop and Stash the Trash!" It really is that simple! 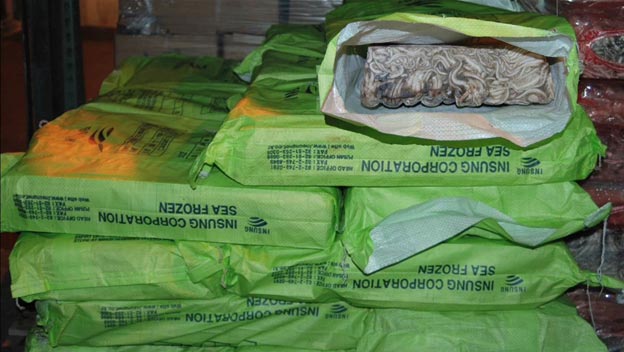 Alternatives to packing bands DO exist. In this photo, blocks of frozen fish bait have been placed in sacks rather than cardboard boxes so no plastic banding reinforcements are necessary to maintain integrity.