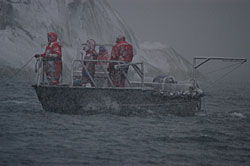 Weather in Glacier Bay during November exceeded our expectations.

We captured 31 immature sea lions during November 2009 at South Marble Island, Glacier Bay, in order to better understand the genetic makeup, physiological condition and winter movements of individuals in the northwestern corner of southeastern Alaska. This region is near the interface of the threatened eastern Distinct Population Segment (DPS) and the endangered western DPS, and our previous work suggests sea lions in this region have origins in both populations. Survival of young sea lions born here also appears higher than elsewhere in southeastern Alaska. This November 2009 project is the first time sea lions older than newborns have been captured in Glacier Bay.

We have analyzed the body fat composition of these study animals, and values are typical for young-of-year (males average 23% of their body mass as fat, females 27% fat) and yearling (males average 23%, females average 21%) sea lions. We have also archived and summarized the movement and tracking data. You may view our map of juvenile sea lion movements (PDF file 546 K).

Most satellite tags provided rich tracking and behavioral information for 2 ½ months. Because these tag lifetimes fell well short of our predicted endurance (8 months, based on battery life and previous experience), we investigated the cause of these premature failures. Our on-site visual observations of tracked sea lions indicate head-mounted tags suffered antenna failure and dorsally-mounted tags detached from the fur. We will incorporate this knowledge into any future sea lion tracking plans.