The causes of the population decline and slow recovery of the western population of the Steller sea lion (SSL) have been the focus of continuing research and debate, with environmental contaminants including organochlorine compounds (OCs) and mercury being hypothesized as a contributing factor. Organochlorine compounds include pesticides and other synthetic organic compounds with chlorinated aromatic molecules. However, the potential impact of OCs on the health and survival of SSLs have not been fully evaluated due, in part, to limited contaminant data currently available for this species. Blubber is widely used for monitoring of OCs in marine mammals; however, collecting sufficient blubber for analysis and archival can be difficult. Thus, alternative matrices, such as blood, feces, and milk, which can be obtained by less-invasive means, has been advocated for, especially for threatened or endangered populations

Beckmen et al (2016) found considerable variation in OC concentrations both between and within each type of tissue collected, and found there was considerable individual variation in concentrations among individual sea lions. Similar patterns were observed across the tissues for most of the selected Polychlorinated Biphenyl (PCB) congeners (organic chlorine compounds). Comparisons between paired tissues showed that ΣDDTs (Σ indicates the summation of) in blubber samples were related to concentrations in blood, feces, and milk. The ΣPCBs in blubber were related to concentrations in milk and fecal samples, though the relationship with feces was weak. These findings show milk samples, in particular, are useful for assessing OCs in young sea lions. The findings indicate alternative tissues may be used as indicators of relative contaminant exposure in lieu of surgical blubber biopsy.

Influence of contaminants on health 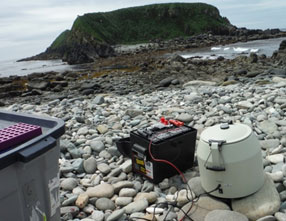 Recent studies have found several Steller sea lion pups had mercury or OC concentrations that were approaching or higher than concentrations found to negatively impact health in seals and other fish-eating mammals (such as mink and river otter). However, the contaminant concentrations that might negatively influence the health of SSLs are unknown. Given the evidence that both mercury and OCs act as immune and endocrine disruptors, further investigation is warranted on the potential impact of these contaminants on the health and development of young SSLs, an age group particularly at risk of these effects. Assessing the health and fitness in free-ranging SSLs is logistically challenging, and previous sampling efforts did not process or archive samples containing immune cells in a manner that would support functional assays. ADF&G began a study in 2016 to measure a suite of parameters including contaminant concentrations and endocrine and immune components in blood and hair samples collected from Steller sea lion pups. Additionally, in vitro cell culture techniques will be used to assess the impacts of mercury on immune cells.