You are here: ADF&G Home » Fishing » Subsistence » By Area » Kuskokwim
Sign in
myADF&G 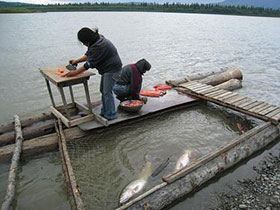 The Kuskokwim River originates on the western slope of the Alaska Range and drains into the Bering Sea at the Yukon-Kuskokwim delta. Extending for 724 miles, it is the second largest river in Alaska. In terms of average volume of water flowing out of the river each year, the Kuskokwim is the ninth largest river in the United States. It is also the longest river to exist exclusively within one US state. The Kuskokwim drainage contains 38 communities and an approximate total of 4,600 households. The Kuskokwim River region can be defined, both geographically and culturally, by three regions; lower, middle, and upper. The lower Kuskokwim region consists of the Kuskokwim Delta area extending from the community of Lower Kalskag to the river’s mouth at Kuskokwim Bay and the Bering Sea. The lower river can be culturally defined as predominantly Yup’ik, but includes a relatively high number of Euro-American residents concentrated around the community of Bethel, the river’s regional hub located 340 miles west of Anchorage and home to approximately 6,500 residents. The middle Kuskokwim region consists of the river extending northwest from community of Aniak through the community of Stony River, including Lime Village. Culturally, the middle Kuskokwim contains Athabascan, Yup’ik, and Euro-American residents. The upper Kuskokwim region includes the communities of Takotna, McGrath, Medfra, and Nikolai, and extends into the major tributaries that make up the river’s headwaters. Culturally the upper Kuskokwim is predominantly Athabascan, alongside mainly Euro-American residents whom reside primarily in McGrath.