You are here: ADF&G Home » Hunting » Waterfowl
Sign in
myADF&G 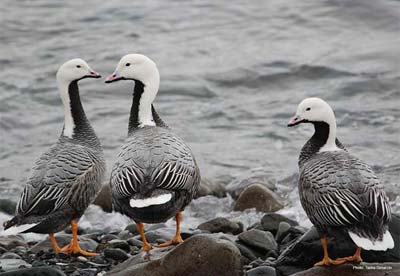 Emperor goose hunting in the fall-winter season is open to Alaska residents by registration permit and to nonresidents by drawing permit. Alaska residents also may hunt emperor geese by proxy during the fall-winter season. Over 30 years of conservation efforts have helped emperor geese recover from a low population size to allow their harvest. However, careful management of the population is still necessary. Federal regulations allow the State of Alaska an annual harvest of either 1000 or 500 emperor geese (liberal or restrictive regulations) administered under a registration permit system. The Alaska Department of Fish and Game (ADF&G) and the Board of Game established 7 hunt areas across the range of emperor geese each with an individual quota that sum to the statewide harvest allowance. A hunt area will close after shooting hours on the last day of the season or by Emergency Order when the area quota is met, whichever is first. Thus, it is important that successful hunters follow the reporting requirement of the registration permits and report their harvest of an emperor goose to minimize overharvest and possible future hunt closures. If you are interested in hunting emperor geese, please see the information below for details of obtaining a registration, drawing, or proxy permit, season dates, hunt conditions, and reporting requirements.

Emperor goose harvest in Alaska is guided by a prescriptive harvest strategy in the Pacific Flyway Council's management plan that is based on using the indicated total bird index from the Yukon-Kuskokwim Delta Coastal Zone Survey conducted by the U.S. Fish and Wildlife Service to assess population status relative to population thresholds. The harvest strategy specifies fall-winter harvest will be open with an annual quota of 1000 birds if the indicated total bird index from the previous year is greater than 28,000 birds; but if the index is between 28,000 and 23,000 birds, a restrictive quota of 500 birds will be put in place. If the index is below 23,000 birds, the hunt will be closed. The 2021 total bird index was below the 28,000-bird threshold that prescribes an allowable harvest of 500 birds for the fall-winter hunt of 2021-2022. 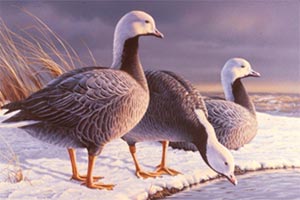