The shores of Hallo Bay may be a good place to look for bears. The Alaska Peninsula is home to some of the greatest concentrations of brown bears anywhere. In parts of the peninsula, it approaches one bear per square mile. Watch for bears on beaches from April and May, when they leave their dens, through as late as November.

Land mammals along the peninsula include moose, caribou, wolves, wolverines, river otters, and foxes. According to the US Fish and Wildlife Service, the northern Alaska Peninsula caribou herd is one of 13 of significant size within the state. Over the last 50 years, herd sizes have ranged from 2,000 to 20,000 animals. Smaller groups of caribou live year-round in the coastal bays and valleys from the Katmai coast southward.

Moose were very scarce on the Alaska Peninsula prior to the 1950s. They increased and spread southwest in the 1950s and 1960s. Today they range south to Stepovak Bay. South of there, willow shrubs are too scarce and too short for moose to browse. 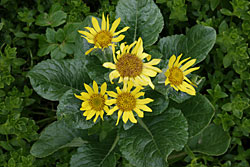 Wildflowers peak in June and July along the coastline south of Shelikof Strait. The treeless tundra at times seems carpeted by anemones, lupine, wild geraniums, arnica, and forget-me-nots. Large, daisy-like seabeach senecios are the bright spots of yellow among the driftwood. In July and early August, the dark pink of fireweed dominates the mountainsides, followed by pale lavender Siberian asters, the harbingers of fresh snow.

Watch rocky crags for peregrine falcons, gyrfalcons, and merlins. Northern harriers glide along beaches and lowlands. The nearshore islands and islets provide breeding sites for least, crested, parakeet, and rhinoceros auklets, which venture offshore to feed. Ancient, Kittlitz’s, and marbled murrelets also breed here. Marbled murrelets, which elsewhere in their range nest in the tops of old-growth trees, nest here on rocky plateaus. Red-faced and pelagic cormorants are common along this stretch, resting on protruding rocks, dock pilings, and even floating debris.